Curtain to Fall on 'Gravity Falls' 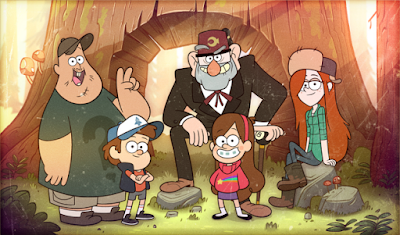 G R A V I T Y   F A L L S
[Source: Yahoo!TV] Gravity Falls creator Alex Hirsch took to social media to announce that the Disney XD series will wrap after two more episodes. “There’s no easy way to say it so I’m just going to say it: Gravity Falls is coming to an end,” he said in a Tumblr post. “There are two more episodes left: “Weirdmageddon II: Escape from Reality” and “Weirdmageddon III” which will be our hour long series finale. After that, Gravity Falls as we know it will be over.”

The animated series, which launched on Disney Channel in June 2012 and moved to Disney XD in August 2014, chronicled twins Dipper and Mabel, who live with Great Uncle Stan in the off-kilter town of Gravity Falls, Oregon.

Hirsch pointed out that he was ending Gravity Falls, rather than it being cancelled. It wasn’t a matter of ratings: The show’s midseason premiere in July drew Disney XD’s biggest audience ever for a regular series broadcast in Live+3.

“This is 100% my choice, and its something I decided on a very long time ago,” he wrote. “I always designed Gravity Falls to be a finite series about one epic summer- a series with a beginning, middle, and end. There are so many shows that go on endlessly until they lose their original spark, or mysteries that are cancelled before they ever get a chance to payoff.”
Posted by anim8trix at 12:00 AM