H  I  L  D  A
[Source: Polygon] Review by Charlie Hall.
Netflix’s newest cartoon series, Hilda, based on the Eisner Award-nominated comics written and illustrated by Luke Pearson, premiered on the streaming network in September. My family instantly became obsessed with it.


Not only is it beautiful to look at, but the cartoon adamantly refuses either a wink or a nod at the real world. It is a fully enclosed narrative universe, with its own internal rules and logic. It’s about as pure as children’s television can get and, if I’m being honest, it’s served as a bit of an escape for me as well.


Our family’s first introduction to Hilda came a few years back when it was a feature title on Free Comic Book Day. Since then, my oldest daughter has kept it close to the top of the stack of her free-time reading books. My wife and I have both heard that same story read aloud a dozen times, and it’s little wonder that it resonated so much with an eight-year-old: The bright colors and wild storyline filled with magical creatures stands out in the sea of dumbed-down superhero and science-fiction comic offerings aimed at kids.


Suffice it to say that when Hilda appeared in the new releases column on Netflix, my daughter was ecstatic. Sitting down after school one day and watching the first few episodes with her, I was floored.

Netflix’s Hilda, like the comics, focuses on a young girl living in a modern, pseudo-Scandinavian country. The colors used to illustrate each episode standout; warm, autumnal pastels during the day and deep, rich blues at night. The animation is remarkably unique with joyful, flowing movements emphasized by a sort of syncopated rhythm in the details. 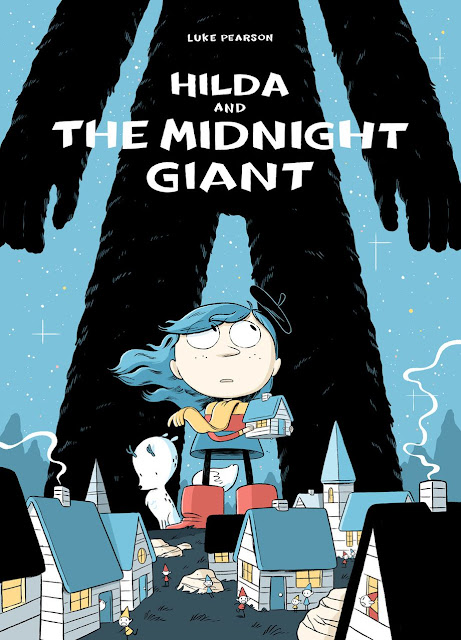 The first few episodes of Netflix’s Hilda are based on the second book in the series by Luke Pearson, Hilda And The Midnight Giant. - Luke Pearson

As it turns out, the valley is bursting with an entire elven civilization. Hilda and her mother find themselves terrorized at night, as invisible elves tear up their house. The young girl embarks on a quest to discover what’s angered the elves, and in the process discovers the ancient history of the giants wandering the mountains all around her.


The two-episode arc is a modern day parable about growing up, leaving the comfortable world that you knew as a child and leaping off into a new environment. It’s an empowering tale, especially for young viewers challenged by new classmates and new expectations as they head back to school. 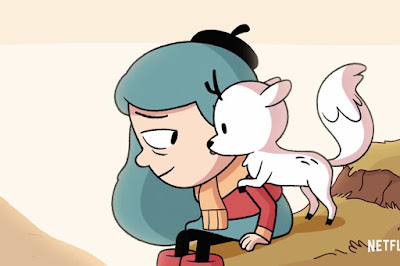 It seems as if many modern children’s cartoons to take the easy road, retelling the same old stories for audiences that were just born yesterday. Many others, including My Little Pony and the critically-acclaimed reboot of DuckTales, spend just as much time pandering to the adults in the room as they do generating pap for their kids.


Hilda is taking an entirely different approach: reframing the struggles of youth as magical challenges, filled with fantastical creatures and plenty of love and support. It’s wonderful to be able to share that with my oldest child, to watch its metaphors bloom inside her head. I’m excited to see where the show takes her.
Posted by anim8trix at 12:00 AM