For a generation of Western kids raised on toy commercials masquerading as cartoons, Robotech felt like something dramatically different. What made it so revolutionary? Click HERE for a detailed history of the '80s anime that changed everything. 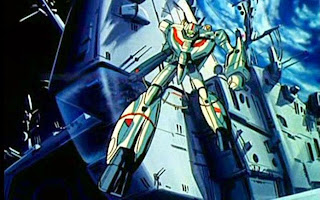 REMEMBER BATTLE of the PLANETS? 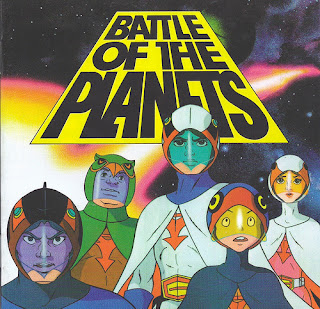 BATTLE of the PLANETS cast five young people as G-Force, consisting of Mark, Jason, Princess, Keyop, and Tiny. G-Force protects Earth from planet Spectra and other attacks from beyond space. The most prominent field commander of the Spectra forces was a villainous, masked individual known as Zoltar. Zoltar would receive his orders directly from a being he would refer to as "Luminous One". The Luminous One would appear as a ghost-like, disembodied, floating head. Who, or what this being actually was, is never explained in any detail throughout the series. The main ship of the G-Force team was called the Phoenix, which could carry, transport and deploy four smaller vehicles, each operated by one team member. The four vehicles included a futuristic race car with various hidden weapons driven by Jason; this vehicle was concealed within the Phoenix's nosecone. The "galacti-cycle", a futuristic motor cycle the Princess rode, was stored within the left wing capsule of the Phoenix. Keyop's "Space Bubble", an all-terrain, tank-like vehicle capable of VTOL as well as being a submersible craft, was held in the right storage capsule of the Phoenix. And lastly, a futuristic jet fighter Mark pilots was stored in the top rear section of the Phoenix command island structure, and which used its tail fin to make up the center tail fin of the Phoenix. The fifth crew member, Tiny, was assigned to pilot the Phoenix rather than one of the detachable craft. 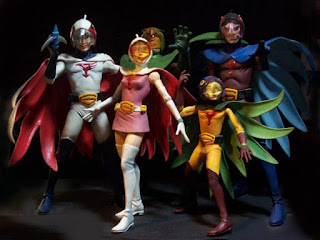 A regularly featured plot device was the transformation of the Phoenix into a flaming bird-shaped craft able to handle virtually any exceptional situation by functioning as a sort of giant, super blowtorch called the Fiery Phoenix. The Phoenix’s primary weapon was a supply of rockets called "TBX missiles" in the series. It also occasionally flaunted a powerful solar-powered energy blaster, although the team had the misfortune of choosing very cloudy days to use it.


The G-Force team themselves would use a combination of martial arts skill, ninja-like weapons, and their "cerebonic" powers to dispatch hordes of enemy soldiers and overcome other obstacles. Their bird-like costumes include wing-like capes that could fan out and function nearly identically to parachutes and/or wing suits, enabling the G-Force members to drift or glide down to safety from heights which would otherwise prove fatal.


The G-Force members stay in contact through a wrist-band communicator device which also serves as a way for them to change instantly into their G-Force uniforms or back into their civilian clothes. Other weapons seen displayed by various team members include: Mark's sonic boomerang, a bird-shaped boomerang with razor sharp wings; Jason's and Tiny's multi-purpose gadget guns, which can be outfitted with grappling hook and line, drill bits, etc.; and Keyop's and Princess's yo-yo bombs, which could be used as bolas, darts, and explosive devices. Other weapons include feathers with a sharpened steel quill that could be used as deadly throwing darts, and mini-grenades shaped like ball bearings with spike studs. 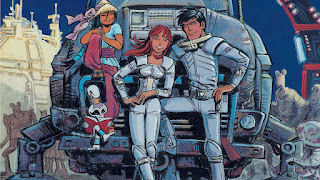 VALERIAN and LAURELINE: The series focuses on the adventures of the dark-haired Valérian, a spatio-temporal agent, and his redheaded female colleague, Laureline, as they travel the universe through space and time. Valérian is a classical hero, kind-hearted, strong and brave who follows the orders of his superiors even if he feels, deep down, that it is the wrong thing to do. On the other hand, his partner Laureline combines her superior intelligence, determination and independence with sex-appeal, making her one of science fiction`s most notable heroines. Influenced by classic literary science fiction, the series mixes space opera with time travel plots. Christin`s scripts are noted for their humour, complexity and strongly humanist and left-wing liberal political ideas while Mézières` art is characterised by its vivid depictions of the alien worlds and species Valérian and Laureline encounter on their adventures. The series was a landmark in European comics and pop culture, and influenced other media as well – traces of its concepts, storylines and designs can be found on sci-fi films such as Star Wars, The Fifth Element, and Avatar.