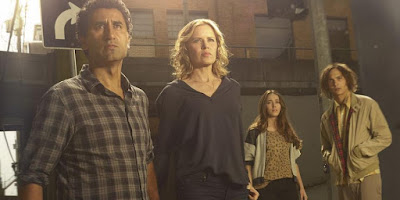 F E A R   T H E   W A L K I N G   D E A D
[Source: blastr.com] Get ready! Executive producer Gale Anne Hurd and the diabolically fiendish minds behind AMC's The Walking Dead are plotting to hit east Los Angeles with their zombie apocalypse, and it's not going to be pretty. AMC's Fear The Walking Dead is a “companion” series that promises to fill us in on how the zombies took over and explore new territory beyond The Walking Dead.

The series, which premieres Sunday on AMC at 9/8C, follows high school teacher Travis and his blended family, including financee Madison, her two teenage children, and Travis's teenage son in east Los Angles as they try to survive what we as viewers know will be a zombie apocalypse that will threaten to destroy human race.  Fear comes from Hurd, Dave Erickson, Robert Kirkman, Greg Nicotero and David Alpert; and stars Cliff Curtis,  Kim Dickens, Frank Dillane, and Alycia Debnam Carey.

Unlike the original series, which the comic book series, Fear has all new characters and a new location. AMC has ordered a six-episode first season and picked up the series for a second season that will air in 2016.

I spoke with Hurd recently in an exclusive interview with Blastr about what we can expect from Fear The Walking Dead, how the new series is different and why she wanted to take on this new project.

What's the set up of the new series?

We start with the very early stages of the zombie apocalypse. In keeping with The Walking Dead, this is a grounded representation of what would happen to a family as the world is collapsing around them because of this contagion. We started The Walking Dead almost a month in as Rick wakes up from his coma. So this series is full of the confusion that everyone has, the average person has, law enforcement, the military, the government who really doesn't know what's going on and there's no precedent for it.

We're dealing with a blended family, one that's coming together like many families, not only in America, but throughout the world. They're coming to terms with what that means, which is hard enough without finding out that something devastating is going on.

Tell us about the location and why you chose it.

This is in LA and it's a part of LA that we haven't seen very much in films or television in east Los Angeles. It is multicultural. It's very diverse like Los Angeles is. It's working class. …
It's not the Santa Monica. It's not the Hollywood. It's not the Beverly Hills. Nor the downtown. It's north and east of downtown.

We wanted to show an area that was not only representative of Los Angeles, but also representative of many urban communities throughout the United States. These are people who both work in a local high school. They're not upper class, and they're not in law enforcement. They don't come to this with the skills that a Rick Grimes or a Shane Walsh had as we started The Walking Dead.

What themes will be explored in the series, and how will they be the same or different than The Walking Dead?

The thing that remains constant is “Who would you be if this were to happen?” That is something that we examine with an entirely new cast of characters on the series. The difference is in The Walking Dead, Rick was trying to find his family only to find his best friend in the world has lied to his wife and said that he's dead. This is a family that is struggling to survive together. … So that's very different.

We are following a family. Travis and Madison are in a newer relationship. They both have children from previous marriages that they're trying to blend together. You've got all of the conflict and friction in this new relationship that's forming when society is collapsing. So that's once again something quite different.

What challenges have you had with Fear The Walking Dead?

Remembering that we are dialing it back and that the characters in this world don't know the rules, so you have to go back and say, "Okay. It's not like Rick could sit down at dinner and eat at Morgan's in the pilot in the first episode of The Walking Dead and have someone explain the rules to him." It's important to not get too far ahead of our storytelling.

Dave Erickson and Robert Kirkman in the writers' room have crafted really compelling trips that are going to take you, the viewers, into worlds you have not experienced before. Some are really morally complex. Each person is going to approach this based on their own view of the world and their interpretation of what's going on, and they're going to come to different conclusions.

What's surprised you most so far?

Fresh walkers... They are frightening. They are so close to the humanity that they had that they are shocking on a whole different level.

Gale, you've done The Terminator, Aliens, Alien Nation, Tremors, T2, Armageddon, and The Walking Dead, to name a few. What's special about Fear The Walking Dead for you?

I'm dealing with an entirely new cast, both in front of the camera and on the crew, and that is what keeps me interested. Those are really remarkable and talented people. You want to see where the next day goes. You're on a journey and that's what's so great about serialized storytelling. It's really pulling back the layers of these characters as they go deeper and deeper into a world that is unlike anything that they have experienced before and for which they don't have the skillset.

Why should people tune in on Sunday?

This series stands on its own and I think it would be just as compelling because of the world and the characters even if The Walking Dead never existed.

Here's a look at Fear The Walking Dead:
Posted by anim8trix at 12:00 AM