The synopsis for New Godzilla Anime for Netflix 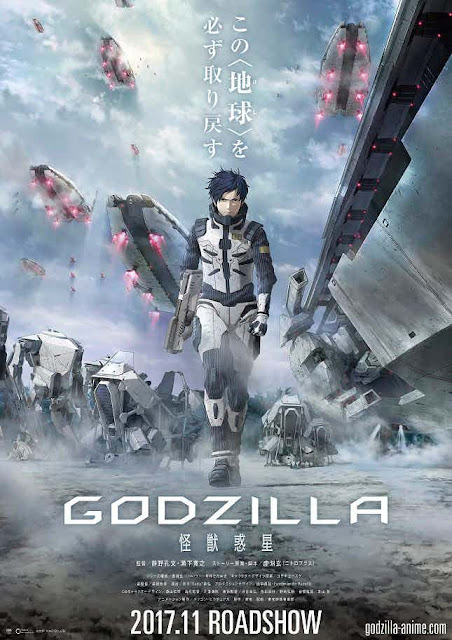 NETFLIX's  G O D Z I L L A
Over the years, there have been many iterations of Godzilla created. As the King of the Kaiju, the giant lizard has served as the unofficial mascot for monster movies in general. Still, attempts to modernize him haven’t always worked. That all changed in 2014 when Legendary Pictures reintroduced the character in a gritty new fashion. Helmed by Rogue One director Gareth Edwards, the movie kicked off a new MonsterVerse for Legendary, one that got its second installment a few weeks ago with Kong: Skull Island. With the success of both films, Legendary are poised to dominate the market on kaiju films, especially considering The Great Wall and Pacific Rim are also their creations.

While those latter two aren’t connected to the new MonsterVerse, neither are all versions of Godzilla. We’ll see the 2014 version revisited in 2019 with Godzilla: King of Monsters, but fans of the character will get another look at him later this year as well. We learned last year that an anime version of Godzilla would be released in 2017, and more recently found out it would be coming to Netflix after premiering in Japan. Now, we not only have a title for the film, but a poster and synopsis.

Thanks to Crunchy Roll, we know the new movie will be called Godzilla: Monster Planet. It will premiere in Japan this November, before Netflix picks it up. The adventure will focus on a future world where Godzilla and other kaiju rule the planet, and humans have to fight to survive. Check out the poster, along with the full translated synopsis, below:


The last summer of the 20th century. On that day, the human race realized that they were not the only ruler of the planet earth.

The emergence of gigantic monsters “kaiju” and the ultimate existence that even can destroy the kaijus, Godzilla. After half-century of the war against the kaijus, the human race repeatedly defeated and decided to escape from the earth. Then finally in the year 2048, only people who were chosen by the artificial intelligence under the control of the central government went on board the interstellar immigrant ship Aratrum and left for the “Cetus: Planet Tau e” which was 11.9 light years away from the earth. But the environmental condition difference between the earth and Tau e, which took 20 years to reach, was far exceeded the predicted value, and there was no way to survive for the human race.

A young man named Haruo is on board of the immigrant ship. His parents were killed by Godzilla right front of him when he was 4, since then, he has been thinking about only going back to the earth and killing Godzilla for 20 years. Since there is no hope for immigration to other planets, the “Return to the Earth” group including Haruo becomes the mainstream in the ship as its living condition is getting worse, then they decide to try the long distance hyperspace navigation.

However, 20,000 years have already passed when they finally arrive the earth, and it becomes a totally unknown world dominated by an ecosystem topped by Godzilla. Can the human race take the earth back, and the fate of Haruo will be…?

The announcement also came with some concept art, showing more pieces following a similar announcement earlier this year. Mostly, they tease the ships and tech that exist in this far future.

There’s no word yet on when exactly Netflix will air the film, but it will likely arrive before the year is out. That should hold fans over until 2019’s live-action return of the king. After that, Kong and Godzilla will be duking it out in 2020’s Kong vs. Godzilla. If the anime’s a hit, expect more looks into the future of kaiju to emerge soon as the Godzilla resurgence continues.

Godzilla: Monster Planet premieres this November in Japan before coming to Netflix.
Posted by anim8trix at 12:00 AM