Remember this show?
We Highly Recommend it! 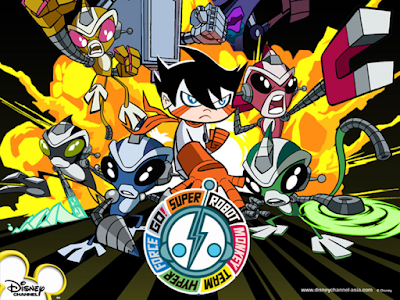 Super Robot Monkey Team Hyperforce Go! (commonly known by its initialism, SRMTHFG) is an American/Japanese animated television series, and was created by Ciro Nieli, one of the directors of Teen Titans, produced by Jetix Animation Concepts with animation being done by a Japanese studio known as The Answer Studio (who would later work on the Cartoon Network original series Transformers: Animated). Set mainly on the fictional planet of Shuggazoom, the series follows the adventures of five cyborg monkeys and a human boy named Chiro as they struggle to protect their planet - and the rest of the universe - from the forces of evil.

SRMTHFG is reminiscent of classic 1960's anime like Astro Boy and Speed Racer. Its simplistic designs and animation style seem to pay homage to those beloved shows of yester-year. And what makes this a worthy recommendation is the engaging storyline and likeable characters that make it a step above and beyond your typical kids show. Suit up and join the SRMTHFG!
Posted by anim8trix at 12:00 AM