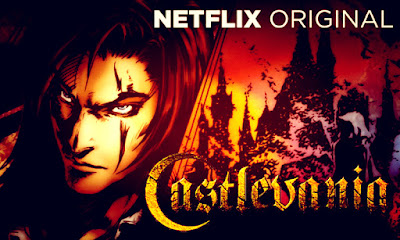 CASTLEVANIA
[Source: Yahoo!News] After nearly a decade in production, Frederator Studio’s animated Castlevania series has finally been released, and lo and behold it is awesome. Initially conceived in 2007 as an 80-minute straight-to-DVD feature before resurfacing this year as a limited streaming series courtesy of Netflix, the four-episode first season follows the life of the whip-wielding vampire hunter Trevor Belmont and his unerring quest to fight back the legions of hell and deliver the world from the clutches of the immortal Count Dracula.


The Castlevania franchise has cast a profound influence over the world of videogames since its debut on the Nintendo Famicon system in 1986, with its very name combined with Nintendo’s Metroid series to create a portmanteau shorthand for an entire successive subgenre of action-adventure games set in impossible, labyrinthine spaces. The series’ earliest installments such as Castlevania III: Dracula’s Curse, the animated series’s basis, and Castlevania: Symphony of The Night are master classes in economical game design, pushing players through hellish gauntlets and colossal boss fights set in gothic victorian corridors long before titles like Dark Souls and Bloodborne became synonymous for such qualities. Despite the series’ occasional stumbles, Castlevania is an enduring staple of videogame royalty and its animated series is cause for celebration for fans and newcomers alike.


Who better to pen the Castlevania series than Warren Ellis, whose illustrious tenure has sired some of the most inimitable and genre-savvy writing in popular fiction to date. Known for his work on series including Hellblazer, Red, Transmetropolitan, and Injection, not to mention his screenwriting credits on the 2008 survival-horror game Dead Space, Ellis has shown himself to be a maven of thoughtfully-driven macabre. Paste had the opportunity to correspond with Ellis over email to discuss his ties to Castlevania, how he first became involved with the series’ production, and what future installments in the series might explore. 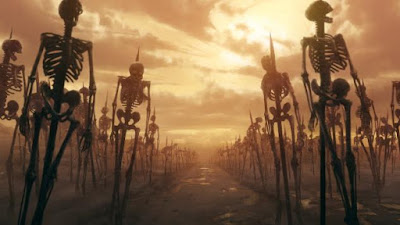 Paste: Having written for several videogames in the past (2005’s Cold Winter, 2008’s Dead Space), and presumably being a gamer yourself, how and when did you first encounter the Castlevania series? What was it that first attracted you to it?

Warren Ellis: Actually, I’m not a gamer! And the awful truth is that I’ve never played or even seen the game. Terrible, isn’t it? When I was first contacted about Castlevania, some 10 years ago, I went to the internet to look it up, and what immediately struck me was how it initially appeared, to me, at least, to be a Japanese transposition of the Hammer Horror films I grew up with and loved. I’m sure that’s a completely wrong-headed perception, by the way, but that’s how it hit me, and how I realized I could write a medieval horror fiction while obeying the ground rules of the work being adapted.

Paste: Back in 2007, you talked about the challenge and potential inherent in writing for an 80-minute film. Establishing plot beats, realistic characters, “killing your darlings,” etc. How has the migration to Netflix benefited or complicated the process of writing Castlevania?

Ellis: I spent a few weeks wishing I still had some hair to pull out. Netflix responded so strongly to the 2007 screenplay that I felt like I couldn’t change it too much for the four-episode season, and also, of course, it’s the version signed off on by the rights holders, the one that obeys the original material. So there was a lot of surgery, scenes thrown out, finding episode breaks, wishing death on my 2007 self, etc.

Paste: In the past you’ve talked about how much you wanted your version of Castlevania to be as true to the dark, hyper-violent aesthetic of its source material. Has that changed at all in this latest incarnation? Will we or will we not get to see people getting whipped to death with Devo playing in the background?


Ellis: No Devo, I’m afraid. Though we do whip it. But we do have the magnificent Trevor Morris doing the music, thank god. It’s pretty violent, I think? Within the boundaries of the original material, of course, which I don’t think of as being super-violent. But I might be the wrong person to ask, since in the last issue of my comics series Injection I did three pages of some poor bastard having his guts torn out through his pelvis by ghosts. It’s all relative.


More importantly, for me, [is that] I have great actors, and I try hard to serve them well. And I have a great director and animation team, and try to give them beautiful and lunatic things to make.


Paste: The world of 2017 is very different place than the world of 2007, particularly with the rise of video streaming services and on-demand binge watching. Just as direct-to-DVD releases were a creatively-liberating force, how do you feel streaming services have facilitated creators like yourself to craft the best version of their stories? What can you do now in 2017 that you couldn’t do in 2007?


Ellis: The way we’ve structured this project actually lets us do both sides of the affordance of streaming. Our first four episodes are really kind of a compressed, headlong experience, but the liberation from hard and fast run-times means we can take a minute here, two minutes there, and let each beat of the story breathe, visually, in a satisfying way. Not being locked into a strict container of time is probably the biggest and most important change that streaming services have ushered in, and I think it’s a huge change for the better. In 2007, we would have been locked into an 80-minute runtime, I believe, and while we could have done it, I think the 2017 edition is the best version of that story.


Paste: Without getting into specifics, were the series to continue, what sort of stories and characters would you like to explore in future installments?


Ellis:I keep thinking of it as two seasons, but it’s really just one, split into two unequal parts. I think we’re allowed to say that? So I’ve written what I think of as Season Two already, which is where I move away from the source material somewhat, stretch my legs, and probably get a little eccentric in places. “Season 1, Part 1” is telling the story we originally showed up to tell 10 years ago. “Part 2” is where I take more advantage of being on Netflix, I think.


Castlevania began streaming on Netflix on July 7.
Posted by anim8trix at 12:00 AM