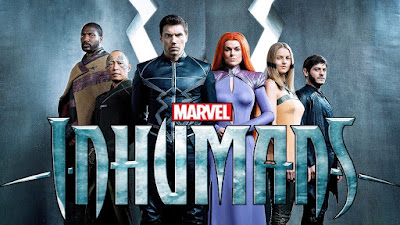 MARVEL'S INHUMANS
[Source: Syfy] The trailer introduces us to the world of Black Bolt and the Royal Family and confirms the Inhumans have been hiding out on the moon all this time in the MCU. Things go sideways when a coup is designed to push the Inhumans to return to Earth, though, so Lockjaw snatches up Black Bolt and takes him on to Earth before all hell breaks loose. From there? We get some quick shots of folks running, punching and a bit of SFX action.

What stands out: Lockjaw looks really cool, and it seems there’s actually a chance they can pull him off on a TV budget. The shots inside Attilan didn’t really light the world (err, moon?) on fire, and they seem to be having a bit of trouble shaking the look that sets like the throne room are just taking place in a big ol’ soundstage. This project lands in an interesting, if awkward, place with the IMAX opening ahead of the TV premiere. Trying to balance the budget between a TV show and movie-style production is no easy feat, but here’s hoping they work the kinks out in post over the next few months.

Sadly, we don’t see much of Medusa’s hair in action, and as for Black Bolt’s signature yell, all we get is a cough (literally) — though they obviously have to keep some cool stuff back for the show, right?

The cast includes Anson Mount as Black Bolt, Iwan Rheon as Maximus, Serinda Swan as Medusa, Eme Ikwuakor as Gorgon, Isabelle Cornish as Crystal and Ken Leung as Karnak. The pilot will premiere September 1 on IMAX ahead of the eight-episode series’ premiere September 29 on ABC.
Posted by anim8trix at 12:00 AM