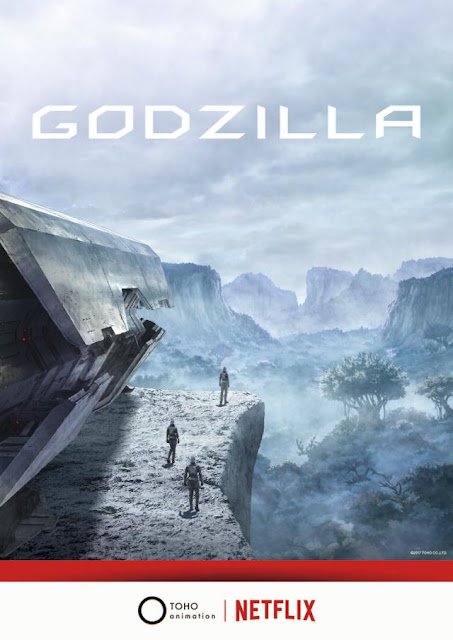 G  O  D  Z  I  L  L  A
Knights of Sidonia studio Polygon Pictures is hard at work with Toho on a Godzilla anime, known as Godzilla: Planet of the Monsters, which will arrive on Netflix at some point this year. The Godzilla anime will be directed by Kobun Shizuno, who directed the Detective Conan: The Darkest Nightmare and other Detective Conan movies, Fist of the North Star: The Legend of Kenshirô, Fist of the North Star: The Legend of Toki and Knights of Sidonia, and Hiroyuki Seshita (Blame!, Ajin). The screenplay will be penned  by graphic novel writer Gen Urobuchi (Madoka Magica, Thunderbolt Fantasy Puella Magi, Fate/Zero, Psycho-Pass).

“We’re looking forward to bringing a spectacular entertainment experience for both existing fans of Godzilla and people new to the franchise,” said Godzilla director, Kobun Shibuno in a statement.

“I’m thrilled to collaborate with two very talented colleagues, Mr. Gen Urobuchi and Director Kobun Shizuno to bring to life a unique vision of a universal human drama set in an epic world.” Meanwhile, screenplay writer Gen Urobuchi added, “I am very honored to join this Godzilla project as one of its Japanese creators. I’m grateful for all the support and really excited to bringing this content to fans worldwide.”

"We are truly delighted to unveil Godzilla, which is the latest addition to our growing  catalogue of Netflix original anime content”, said Greg Peters, President, Netflix Japan. "Working with the best creators such as Toho in bringing Godzilla to Netflix users in over 190 countries marks a major milestone for us."

Here's the first trailer for Godzilla: Planet of the Monsters, which looks gorgeous!

Godzilla is one of the most recognizable symbols of Japanese popular culture around the world. Starting in 1954 and through 29 films Toho’s Godzilla was the face of atomic fears that gripped Japan since bombings of Hiroshima and Nagasaki. The first time an anime version of a Godzilla character appeared on Japanese television was in a crossover with Crayon Shin-chan. The Godzilla franchise inspired a western animated series from Hanna-Barbera in 1978 and then a follow-up to the maligned 1998 American Godzilla film from Roland Emmerich.

Stay tuned for an official Netflix release date!
Posted by anim8trix at 11:20 PM