Trailer for 'The Breadwinner' 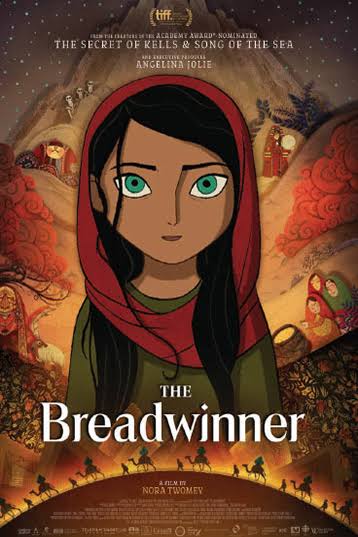 THE BREADWINNER
Based on Deborah Ellis' 2000 middle-grade novel, THE BREADWINNER follows curious, storytelling 11-year-old Parvana (voiced by Saara Chaudry), who helps her father, an amputee former teacher, peddle goods in a market in Kabul, Afghanistan. Taliban soldiers and followers harass him and eventually imprison him for being "an enemy of Islam." Without a father to care for them, the family -- which includes Parvana; her older sister, Soraya; their baby brother; and their mother -- is left without any means to make money or even purchase goods in the market. So Parvana decides to cut her hair and disguise herself as a boy in order to leave the house, provide for her family, and attempt to find and speak to her father in prison. Much to her surprise, Parvana discovers that a former classmate, Shauzia (Soma Chhaya), is also pretending to be a boy to make a living. Can the two girls successfully avoid Taliban attention?

This gorgeously animated but unflinching tale of a young girl's courage under Taliban rule is a poignant, important reminder about the violence that girls and women face in extreme patriarchies. The story of a girl disguising herself as a boy is a familiar one, but The Breadwinner puts a unique spin on it, because Parvana doesn't do it to fight, like in Mulan, or to learn, as in Yentl, but simply to survive. Not only are all mothers and daughters supposed to stay at home unless they're accompanied by husbands or fathers, but even men are restricted in their abilities and schooling (many can't even read). What's extraordinary about Parvana is that she's brave, yes, but she's also committed to carrying on her mother and father's love of ancient Afghani folktales and legends. This leads to a stylized story-within-a-story that Parvana tells her brother about a boy named Sulayman who saves his village from the evil elephant king, despite being young and naive.
The fable, which has a different look than the rest of the film's animation, mirrors Parvana's own role in rescuing her family from certain doom. Her perseverance under unthinkably tense conditions is remarkable; it's an inspiration for her melancholy mother and sheltered older sister. The movie's subject matter might be too intense and the violence too realistic for very young viewers, but tweens and young teens aware of, say, Nobel Prize winner Malala Yousafzai's story, should find it fascinating and educational. Like Irish animation studio Cartoon Saloon's previous big films (The Secret of Kells and Song of the Sea), The Breadwinner blends folklore with realism and ultimately shows how children are far braver than some might think.


Now in Theaters. Buy Tickets to The Breadwinner here!
Posted by anim8trix at 12:00 AM