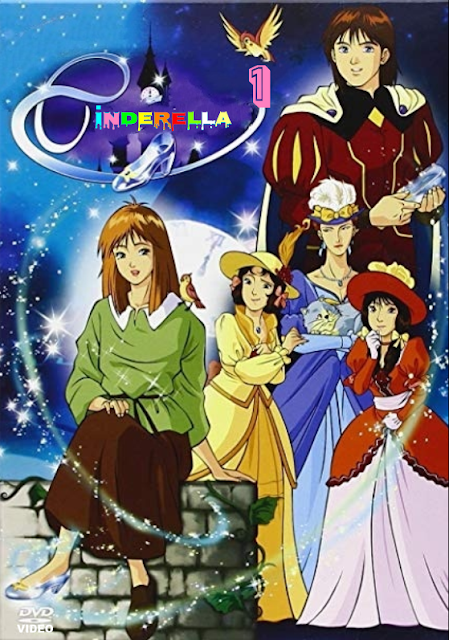 Cinderella Monogatari
Cinderella Monogatari (シンデレラ物語 Shinderera Monogatari, lit. The Story of Cinderella) is an Italian-Japanese 1996 anime television series based on the fairytale of the same name by Charles Perrault and The Brothers Grimm. It was produced by Tatsunoko Production and Mondo TV. The series originally aired from April 4 to October 3, 1996, comprising 26 episodes.

"Considered to be one of the BEST versions of the Cinderella tale."
"★★★★★"
- anim8trix
The Story of Cinderella opens as Cinderella's life changes for the worse when her widower father leaves on a business trip. No sooner is he out of sight than Cinderella's stepmother has unceremoniously moved her two own daughters into Cinderella's room, thrown out her things, handed her a servant's dress, and put her to brutal harsh menial labor. The series covers Cinderella's trials and tribulations as she tries to adapt to her new life while suffering the abuse of her stepmother and her two stepsisters. All the while, her fairy godmother, Paulette, subtly watches her and tries to influence events to fix Cinderella's life without her noticing. One of her first acts in this is to grant several of the animals of the house the power of speech, thus giving Cinderella companions in her dog Patch, a pair of mice named Chuchu and Bingo, and a bird named Pappy. The animals provide her company as well as help with her chores. The biggest twist in the series is that Cinderella meets her Prince Charming early - except here he's the roguish Prince Charles, who has a habit of sneaking out of the castle and meets Cinderella by accident while disguised as a commoner. The two have a few misunderstandings before becoming friends and start having adventures together. Meanwhile, the villainous Duke Zaral plots against the royal family throughout the story, at times working Cinderella into his plots and machinations. The series eventually culminates in the ball in which the fairy tale ends, but with its own unique twist.


▶ Watch Episode One
Cinderella came from a noble family. She is the only daughter of a wealthy and widower duke who has remarried to provide her with a stepmother and two stepsisters. Cinderella's mother died due to illness when she was still a young girl, leaving her with a doll, favorite dress, and a pair of glass slippers.

The story begins with the departure of the father of Cinderella for a long business trip. Unfortunately, she was then left alone with her stepmother and her two stepsisters, Catherine and Jeanne, who are bitterly envious of her beauty. Afterwards, things change for Cinderella; she ends up handling all the chores in the house, and is forced to live in a small room in the attic of the villa.
▶ Watch Episode Three

Fortunately, Paulette, her Fairy godmother, watched over her, secretly removing troubles that Cinderella faced in various situations as well as giving her the gift of being able to communicate with animals. Cinderella soon befriended four little friends who aided her whenever possible; Patch, her dog, Chuchu and Bingo, two clever little mice and a little bird named Pappy.
▶ Watch Episode Four

During one of the few occasions when Cinderella is able to go into town (she is virtually segregated at home to cope with household chores, while her two stepsisters are out having fun), she meets a strange young man who only identifies himself to have a connection with the prince of Emerald Castle. Cinderella initially does not trust him and calls him a fibber repeatedly. However, Cinderella does not know this guy is none other than Prince Charles himself, who, unwilling to stay at the castle to take lessons from his tutor, sometimes runs under the disguise of Alex, his page and great friend.
▶ Watch Episode Five

This marks the beginning of many adventures, including hunting, discovering enchantments, betrayal and conspiracies of the palace that feature the Prince (almost always in disguise), Cinderella and her friends, and her stepmother (who hopes to marry one of her two daughters to Prince Charles). But in the end, Cinderella discovers the true identity of the boy to whom she called a liar several times and is distraught and desperate; how will she make up for what she said to the Prince?.
▶ Watch Episode Six

Meanwhile, the King is organizing a big royal ball, to which all the unmarried girls of the area are invited, so that his son Charles can find a woman to marry. The stepmother and the two stepsisters were angry that Cinderella was also invited.
▶ Watch Episode Seven

The Fairy Godmother, Paulette, always ready to help Cinderella with her magic wand gives her a beautiful gown with the beautiful glass slippers; Cinderella can now go to the ball, but must return before midnight hour when the magic is completed.
▶ Watch Episode Nine

This time, Cinderella is to be incognito at the ball; Prince Charles does not recognize that the beautiful princess who appeared out of nowhere was the companion of many adventures. But, come midnight, Cinderella is forced to flee, losing a shoe on the staircase of the building. The Prince was fascinated by the mysterious princess, desperately searching house to house to find her. It was proclaimed that the person whose foot fit into the shoe would become the bride of the Prince.
▶ Watch Episode Ten

And thus after many difficulties, Cinderella was proved to be that girl and was brought to the palace. On the day of the marriage, Duke Zaral had something else in mind. He gave poison to the Prince in his drink and kidnapped Cinderella. He took her to top of the Clock Tower and forced the King, Charles' father, to give up his kingdom in lieu of Cinderella since his son was no more.
▶ Watch Episode Eleven

Suddenly Prince Charles, who did not really die, appeared with the palace guards. He explained that he had already known about Zaral's plan and acted accordingly.
▶ Watch Episode Twelve

A fierce battle ensued between Zaral and the Prince. At last Zaral fell from the Clock Tower. Cinderella and Prince Charles were married and lived happily ever after.
Posted by anim8trix at 12:00 AM