"Fight your way to the Next Club Meeting!" 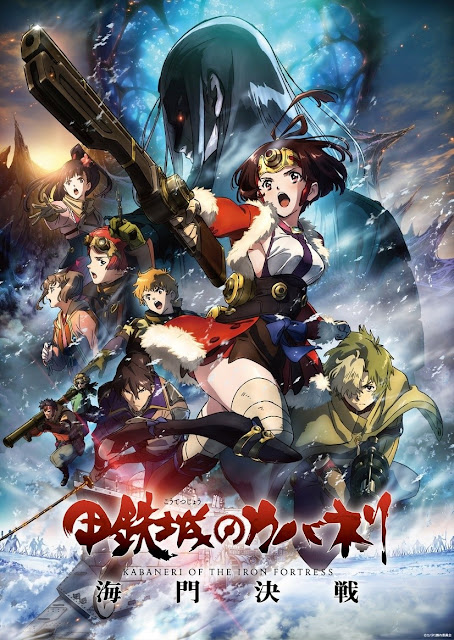 Kabaneri of the Iron Fortress:
The Battle for Unato [Movie]
Plot Summary: [Source: Wikipedia]
Episode 1 - The story begins with a retelling of the TV Series focusing on events leading to the Kōtetsujō traveling to the town of Unato. The town is dominated by a hilltop castle which has become a nest of kabane and threatens the population. Ayame and Kurusu with Ikoma hold a meeting with Kuroji Tuan of the Federal Forces, General Mogari of the Echigo-Tora-Ohuki and Unmo representing the Unato population. Kuroji Tuan plans to use the Narukami, an armored hayajiro with giant cannon mounted on board, to blast the castle while Mogari's men and 200 Unato fighters led by Unmo lead a ground assault. However, Ikoma believes that the Kabane in the castle are being controlled in some way and wants to investigate the castle area first.

Episode 2 - Ikoma prepares to investigate the Unato Kabane, but he has trouble controlling his blood lust and attacks Mumei so he is arrested. Unmo reveals that there are tunnels under the castle made by Kageyuki Komai Tuan, the former owner of the castle. They decide to investigate with Sukari and Mumei and find a separate entrance, apparently used by the Kabane. Meanwhile, the Narukami reaches the main route to Unato early so Tuan Kuroji decides to begin the assault on the castle immediately. Hearing the commotion, Ikoma breaks free from his chains and tries to find Mumei. Meanwhile, Unmo's group are suddenly attacked by Kabane who emerge from the tunnel and attack them, overwhelming the Federal soldiers. Mumei immediately heads into the tunnel, but she finds a series of traps and then encounters a powerful and fast Kazatori. Kuroji Tuan orders the cannon to begin firing, but Kageyuki who is now a Kabaneri, fires bullets filled with blood at the cannon, attracting hoards of Kabane who engulf the Narukami. When Kuroji Tuan orders the cannon fired again, it explodes, destroying itself and the Kabane who overrun the train, killing all the troops, including Kuroji Tuan. In the tunnel, Mumei is wounded and cornered by the kazatori, but at the last minute, Ikoma arrives and kills it.

Episode 3 - Ikoma saves Mumei and as they embrace, they mysteriously find themselves bathed in a green light and are revived. They are joined by Sukari's crew and advance along the tunnel. Meanwhile, Ayame and Kurusu, assisted by Mogari and his men drive the Kōtetsujō upwards toward the castle. Ikoma's group are fired on by Kageyuki and they see a child encased in a blue light in the Kabane nest. Unmo then tells the group how after Kageyuki became a Kabaneri, his daughter Miyuki was killed trying to save him so he bit her to make her a Kabane and she has since become the core of a "Black Fog". They realize that they must stop Kageyuki before Unato is completely destroyed. Mumei attacks him, but during the fight, Unmo vainly sacrifices himself to stop Kageyuki giving Mumei renewed conviction and she fatally shoots Kageyuki. This releases Miyuki who transforms into a Black Fog, emerging from the mountain, cutting a destructive path towards Unato. Ayame orders the Kōtetsujō to leave after Ikoma and Sukari's group return, but the Black Fog catches the train. Desperately, Yukina drives the train at full speed into a dead-end tunnel and fire the train's cannon at the same time, destroying and dissipating the monster. As snow begins to fall, the Kōtetsujō leaves Unato and the key players share some tender moments together.
Posted by anim8trix at 12:00 AM