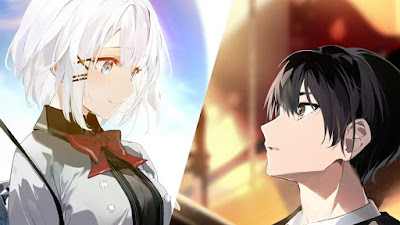 The Detective Is Already Dead
Based on the light novel "Tantei wa Mou, Shindeiru." written by Nigojuu and illustrated by Umibouzu (published by Media Factory under MF Bunko J) is finally getting an anime adaptation. The 2nd trailer released featuring the ending theme song "Kodō" (Heartbeat) by a V-artist "Kagura Nana".

▪ SYNOPSIS I, an ordinary high school student, Kimizuka Kimihiko, a crisis-magnet, was appointed to take care of mysterious attache cases by mysterious men in black suits. After meeting a beautiful angel-like detective girl, named Siesta in a hijacked plane, I became her assistant.

And from there– [You deal with the beehive, and I’ll restrain the enemy.] [Don’t make plans that make me the victim.]

We had those kinds of foolish conversations. Sometimes when we saved money at a casino, we would jump around on the beds at a resort hotel, only to be broke again the next day. We would walk through deserts, traverse through jungles, conquer mountains, cross oceans– The great detective and her assistant would go through these dazzling adventures–

And this story starts after that incident. I’m the only one who’s left, but I carry on her remained wishes. This story is far from over...
▶ Watch the Trailer
Posted by anim8trix at 12:00 AM