"Take that you evil Covid scum!"

ATTACK on TITAN: Final Season
Plot Summary: Gabi Braun and Falco Grice have been training their entire lives to inherit one of the seven titans under Marley's control and aid their nation in eradicating the Eldians on Paradis. However, just as all seems well for the two cadets, their peace is suddenly shaken by the arrival of Eren Yeager and the remaining members of the Survey Corps. Having finally reached the Yeager family basement and learned about the dark history surrounding the titans, the Survey Corps has at long last found the answer they so desperately fought to uncover. With the truth now in their hands, the group set out for the world beyond the walls. In Shingeki no Kyojin: The Final Season, two utterly different worlds collide as each party pursues its own agenda in the long-awaited conclusion to Paradis' fight for freedom.
3:15 - 4:40    Earwig and the Witch [Movie] 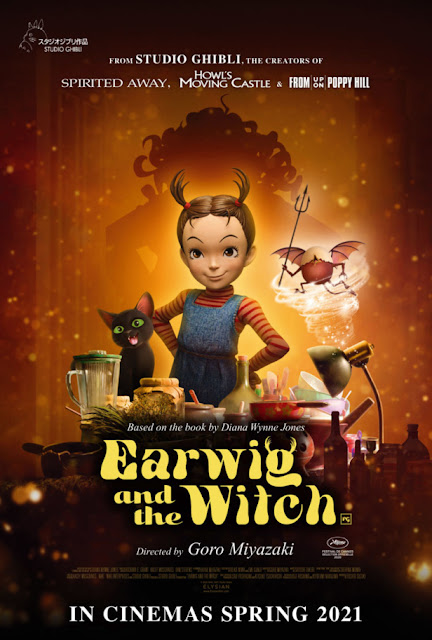 Earwig and the Witch
Plot Summary: In 1990s England, a witch leaves her child, Earwig, at St. Morwald's Home for Children. The matron head of the home thinks that the name is unfit for a child, and changes it to Erica Wigg. Years later, Earwig is a rambunctious 10-year-old who is very comfortable in an orphanage where everyone does what she wants. She likes living there with her friend Custard, and doesn't want to get adopted.

One day, a strange couple, Bella Yaga and Mandrake, adopt Earwig against her wishes. When they get home, Bella Yaga tells Earwig that she is a witch, and that she only adopted Earwig for "an extra pair of hands" to help around the house. Earwig agrees to help, only if Bella Yaga teaches her magic in return. Earwig prepares ingredients for spells, and cleans the workroom. Tired of working, she attempts to get out of the house, only to find that all the exits have been magically sealed by Mandrake. She becomes further frustrated because Bella Yaga never teaches her magic.

Earwig begins to listen to tapes from an old band called Earwig, and discovers that Bella Yaga's cat familiar Thomas can talk. The two of them enter the workroom at night to create a spell that will make them resistant to magic, becoming immune to Bella Yaga's punishments. They also work on a spell to give Bella Yaga a literal "extra pair of hands" on her body so Earwig would be dismissed from her work.

The spell is a success and Bella Yaga is furious at her extra pair of hands, and casts magical worms that appear in Earwig's room. Because of Earwig's magical resistance, the worms are harmless and Earwig sends the worms through a hole in the wall, but that angers Mandrake. In the ensuing chaos, Earwig breaks into Mandrake's room and makes an incredible discovery!