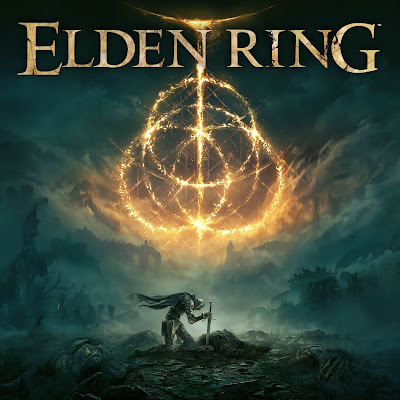 ELDEN RING
Elden Ring takes place in the realm of the Lands Between, sometime after the destruction of the titular Elden Ring and the scattering of its shards, the Great Runes. Once graced by the Ring and the Erdtree which symbolizes its presence, the realm is now ruled over by the demigod offspring of Queen Marika the Eternal, each possessing a shard of the Ring that corrupts and taints them with power. As Tarnished—exiles from the Lands Between who lost the Ring's grace and are summoned back after the Shattering, players must traverse the realm to ultimately find all the Great Runes, restore the Elden Ring, and become the Elden Lord.
▶ Watch the Trailer
The Tarnished is one of many exiles called back to the Lands Between in hopes of repairing the Elden Ring and becoming the next Elden Lord. Early on in their journey, the Tarnished encounters a young woman named Melina, who offers to stand in as their maiden to help them on their journey, under the condition that the Tarnished bring her to the base of the Erdtree where she can fulfill her purpose. She also takes the Tarnished to the Roundtable Hold, a gathering place for other Tarnished seeking to repair the Elden Ring. There, the Tarnished learns from their divine benefactor, the Two Fingers, that in the wake of the Shattering and Queen Marika's disappearance, her demigod children had taken the Great Runes, pieces of the Elden Ring, for themselves, and now war against each other to try and obtain the other Great Runes. The last known Great Rune holders are Godrick the Grafted, General Radahn, Praetor Rykard, Morgott the Grace-Given, and Rennala.

The Tarnished then proceeds to journey into the lands between, investigating its various locales and defeating each demigod one by one until they recover enough Great Runes that the Two Fingers feels they are ready to journey to the Erdtree to confront Morgott, the final obstacle to the tree. Upon his defeat, Morgott claims that the Erdtree will not allow anybody, especially a Tarnished, to enter it before passing away. The Tarnished confirms this when they approach the Erdtree and find their way blocked by a wall of thorns. Melina then arrives and advises that they journey to find the Flame of Ruin, which they can use to set the Erdtree on fire and burn away the thorns. In light of the Tarnished being rebuffed from the Erdtree, the Two Fingers withdraws from the mortal plane to consider its next move, leaving the Tarnished free to proceed with Melina's plan or search for the imprisoned Three Fingers to gain the power of the Frenzied Flame.

Upon obtaining the Flame of Ruin, if the Tarnished did not free the Three Fingers, then Melina will take the flame and sacrifice herself to set the Erdtree on fire. If the Tarnished freed the Three Fingers, then Melina will abandon the Tarnished, forcing them to use their own power to set the Erdtree on fire. Regardless, the Tarnished then proceeds to the Erdtree, where they battle the fellow Tarnished warrior Gideon Ofnir the All Knowing, as well was the First Elden Lord Godfrey to gain access to the interior of the Erdtree. Inside, they fight the reanimated remains of Queen Marika's consort, Radagon, as well as the godlike Elden Beast. Upon vanquishing both foes, the Tarnished finally gains access to Queen Marika's shattered corpse, which contains the remains of the Elden Ring. Depending on the Tarnished's actions throughout the game, four different endings are possible:
Posted by anim8trix at 12:00 AM