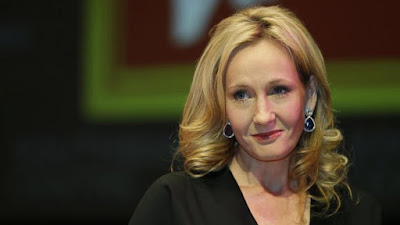 The "Harry Potter" author was celebrated by Time magazine, who asked the films' stars to say something nice on this big day. Here's what they had to say.

J.K. Rowling's Flawless Response to Critic of Serena Williams
Alan Rickman, who played Severus Snape in the series, said "The Happiest of Birthdays, Jo. A breeze for the supreme Time-traveler."

Robbie Coltrane, who played Hagrid, said, joking, "You don't look a day over 40. ... Perhaps you could celebrate your half century by writing a hilarious film. Perhaps, starring, I don't know, a large Scottish man."

Finally, Matthew Lewis, who played Neville in the series, said, "I would like to thank Jo for changing MY life ... That's not even to mention her generosity and loyalty when it has come to supporting everything that I have done in the years since Harry Potter."

There's many more birthday wishes and it's nice to see such admiration from the stars for the creator of a game-changing franchise.
Posted by anim8trix at 12:00 PM