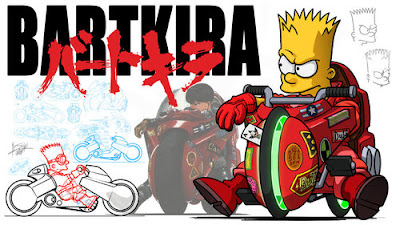 
In partnership with Chicken Tonight, Butterfinger, and CC Lemon, the early 90s execs of Fox and Toho made an animated short. An attempt to appeal to American consumers without having to spend a lot of money. Until a changing of the guard decided the kids needed more Poochie and it was lost... until today.

Bartkira is an animated parody mash-up of The Simpsons and Akira. Based on an idea by Ryan Humphrey articulated through comics, the concept was expanded with the Bartkira project, a comic collaboration of Simpsons fans, curated by James Harvey. In association with the comic, Moon Animate Make-Up producer Kaitlin Sullivan pitched the idea of an animated trailer to match and with the work of over fifty artists, produced the Bartkira animated trailer.
Posted by anim8trix at 12:00 AM