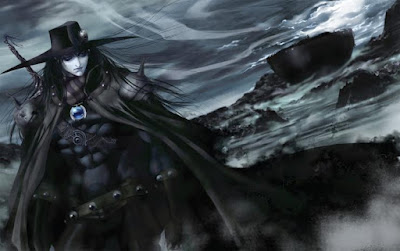 The company will be co-producing the series with Japanese CGI animation studio Digital Frontier, who gave us Resident Evil: Degeneration, Tekken: Blood Vengeance and Mighty No. 9. Another piece of good news is that Kikuchi himself is involved with the project, as well as Vampire Hunter D: Bloodlust director Yoshiaki Kawajiri.

Hideyuki Kikuchi began writing Vampire Hunter D back in 1983, and the 29th book in the series was released this past May. The story follows D, a half-human, half-vampire (shades of Blade, anyone?) called a dhampir, who hunts blood-sucking vampires in a far-future (and I mean really far, since it's set around 12,090 A.D.), post-nuclear world.

Unified Pictures are set to reveal more details regarding plans for the show’s format and story during its panel at Anime Expo at the Los Angeles Convention Center on Thursday, July 2.
Posted by anim8trix at 12:00 AM