The Crazy Crew of Vox Machina is Back for More! 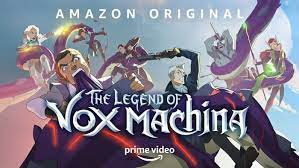 The LEGEND of VOX MACHINA - Season 2
After saving the realm from evil and destruction at the hands of the most terrifying power couple in Exandria, Vox Machina is faced with saving the world once again—this time, from a sinister group of dragons known as the Chroma Conclave. The Legend of Vox Machina is a production by Amazon Studios, Critical Role, and Titmouse for Prime Video. The series stars Critical Role founders and cast members Laura Bailey (The Last of Us: Part II), Taliesin Jaffe (Final Fantasy XIV: A Realm Reborn), Ashley Johnson (The Last of Us), Liam O’Brien (Star Wars: The Bad Batch), Matthew Mercer (Overwatch), Marisha Ray (Final Fantasy XV: Comrades), Sam Riegel (Teenage Mutant Ninja Turtles), and Travis Willingham (Marvel's Avengers). The Critical Role cast also serves as executive producers, alongside Brandon Auman (Star Wars: Resistance), Chris Prynoski (Metalocalypse), Shannon Prynoski (Fairfax), and Ben Kalina (Big Mouth).
▶ Watch the Trailer
The Legend of Vox Machina S2 is coming January 20, 2023.
Posted by anim8trix at 12:00 AM