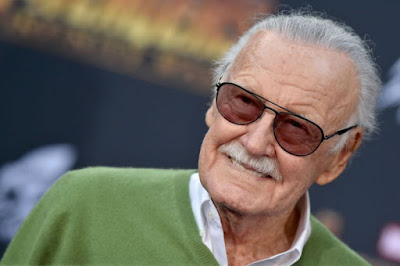 STAN LEE
Godfather of Marvel Comics, dead at age 95
(December 28, 1922 - November 12, 2018)
[Source: Yahoo!News] Stan Lee, the Marvel Comics godfather who helped create Spider-Man, the Hulk, Iron Man and so many more “feet of clay” superheroes, characters that both reinvented the comic genre and formed the basis for the now-dominant motion-picture form, died Monday, according to TMZ and the Hollywood Reporter. He was 95.

In 2018, as the latest Marvel movie, Black Panther, was winning over audiences and critics, Lee canceled public appearances due to an irregular heartbeat and pneumonia. While he returned to the convention circuit a couple of months later, longtime friends and admirers, such as filmmaker/podcaster Kevin Smith, said they were no longer able to communicate with the comic legend, and a report said a battle over the control of Lee’s estate was underway.

Lee, Marvel’s longtime editor and publisher, was credited as an executive producer on nearly 150 films and TV shows based on Marvel titles, including the billion-dollar-grossing X-Men, Spider-Man, Avengers, and Iron Man franchises. Other productions bearing Lee’s name include the Wolverine, Captain America, Guardians of the Galaxy, Fantastic Four, Hulk, Thor and Doctor Strange films, as well as the Jessica Jones and Luke Cage series.

As of 2017, four of the world’s top 20 all-time box-office hits were based on characters co-created by Lee: The Avengers; Avengers: Age of Ultron; Iron Man 3 and Captain America: Civil War. Many more Marvel movies bearing Lee’s name, if not featuring one of Lee’s signature onscreen appearances, are in the pipeline. In 2018 alone, Lee appeared in Black Panther; Ant-Man and the Wasp; Avengers: Infinity War; and Venom. He will also appear in the untitled Avengers movie, due out in 2019.

“Stan’s impact on popular culture is immeasurable,” Tobey Maguire, star of the 2000s’ Spider-Man movies, once said at a Comic-Con event honoring Lee.

Hard as it was to sum up what Lee meant to what we watch, read and consume, the world kept trying. Lee was presented with the Producers Guild’s Vanguard Award, the National Medal of the Arts and a Disney Legends Award. At age 91, he was placed among Oprah Winfrey, Steven Spielberg and George Lucas on Forbes’ annual ranking of the most influential celebrities.

Lee had an aw-shucks take on his career and legacy: “I’m just a guy who wrote comic books,” he would say.

Lee’s own origin story went like this: He was born Stanley Martin Lieber on Dec. 28, 1922, in New York City. In 1939, when he was 17, Martin Goodman, his cousin Jean’s husband, launched Timely Comics, the forerunner to Marvel. Goodman hired the young Lee to refill inkwells for Timely’s editing team, Jack Kirby and Joe Simon, both already renowned for having created the star-spangled Captain America.

When Kirby and Simon left Marvel in 1941, Lee was transformed like Peter Parker was from nerdy high-schooler to Spider-Man: The former gofer was tapped to be Timely’s lead writer, art director and editor-in-chief. The latter title was something Lee, outside a break to serve in the Army during World War II, would hold until the 1970s.

A year later, in 1961, the first issue of The Fantastic Four, co-created by Lee and Kirby, who’d returned to the Marvel fold, was published. The title was unlike anything comic-book fans had seen.

Where the JLA was an all-for-one collective of do-gooders, the Fantastic Four was a group of mutants who bickered.

“I changed the whole line around,” Lee would say. “New ways of [characters] talking, hangups, introspection and brooding.”

Lee’s vision for the superhero came down to this: “Inside their colorful, costumed booties they’d still have feet of clay,” he wrote in his book, Origin of Marvel Comics.

The thinking was revolutionary.

“The beauty of Stan Lee’s characters is that they were characters first and superheroes next,” Jeff Kline, a producer of animated series (Transformers Prime, Dragon Tales), once said. “They never just had superpowers.” 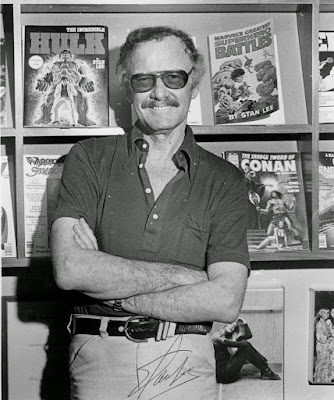 Hulk, Iron Man, the X-Men, the Avengers, Nick Fury, the Silver Surfer, Ant-Man and Black Panther were among the flawed heroes and antiheroes Lee and Kirby cranked out, one after the other, through the early 1960s.

“Lee and Kirby were the Lennon and McCartney of comics,” Dark Horse Comics founder Mike Richardson once told the Los Angeles Times.

With Steve Ditko, Lee co-created Spider-Man, the web-slinging outsider who would become, status-wise, Marvel’s equivalent of Superman. It was Lee who penned, in the very first Spider-Man adventure in Amazing Fantasy No. 15, the words that would famously be boiled down to, “With great power comes great responsibility.”

Lee was front and center as Marvel rose like a rocket, and he became a star (complete with his own catchphrase, “Excelsior!”) to baby-boomer and Gen-X readers of the 1960s and 1970s.

In the 1960s, Hollywood began mining Marvel for fodder for children’s cartoons. As comics moved into the mainstream, Marvel heroes went primetime with the 1970s shows The Amazing Spider-Man and The Incredible Hulk.

Lee’s characters had a tougher time transitioning to the big screen. While DC scored successes with the Christopher Reeve Superman franchise and the Tim Burton Batman movies, Spider-Man and his cohorts languished in development hell. For a time, the most famous Marvel movie was the one that never got released: the low-budget, Roger Corman-branded Fantastic Four. (Lee was not a producer on that fiasco.) In 1996, Marvel filed for Chapter 11 bankruptcy.

Then, in 2000, X-Men opened in theaters, and everything changed. The bigger-than-expected hit spawned multiple spinoffs, including the Wolverine and Deadpool movies, and, along with the Sam Raimi Spider-Man that followed in 2002, sent Hollywood on a superhero binge from which it has yet to back away from. 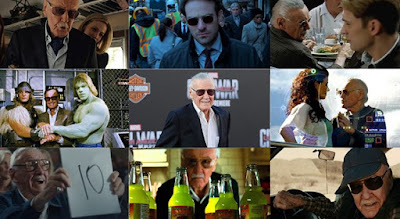 Lee’s name not only appeared in the credits, but the man himself appeared onscreen, a cameo tradition that dated back at least to the 1989 TV-movie The Trial of the Incredible Hulk and will continue with the upcoming Wreck It Ralph sequel, Ralph Breaks the Internet, which open Nov. 21. His 2017 cameo in Guardians of the Galaxy Vol. 2 teased that Lee’s omnipresence was due to his being one of the all-seeing Watchers — yet more characters created by Lee and Kirby.

Lee once joked his cameos were the reason the Marvel movies were so successful. “The cameo is very brief,” he said. “Somebody might miss it, you might’ve reached down for popcorn. If you missed a cameo, what do you do? You run to the box office and buy another ticket! So half of the money they’ve made is because of my cameos!”

In 2009, Disney bought Marvel Entertainment, and a price tag was essentially affixed to the characters, adventures and titles that originated at the Lee-era Marvel Comics: $4 billion.
Lee, who stepped down as Marvel publisher in the 1990s, kept a hand in the company as its chairman emeritus. Always a hustler, Lee founded the media company POW! Entertainment and starred in his own reality-TV series, Who Wants to Be a Superhero?.

In 2017, the man who’d left an imprint on so many literally left his prints at the TCL Chinese Theatre. The ceremony was held less than two weeks after Lee’s wife of 69 years, Joan Lee, died at the age of 95.

Lee grappled with claims of elder abuse, which were being investigated by Los Angeles police, in the past year. He was granted a temporary restraining order against a former business manager in June, following a bizarre series of events, including the disappearance of millions from his bank accounts and the sale of his blood to fans. However, he insisted just last month, “There really isn’t that much drama.”

Through it all, Lee showed no signs of slowing down or of losing the ability to spin a good story. Asked once which of his characters was his favorite, Lee answered as any proud parent would: “I love ’em all,” he said.