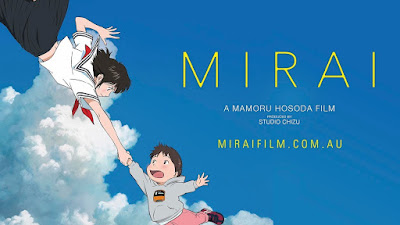 M I R A I
Plot Summary: [Source: Wikipedia] Kun is a boy born to an executive mother and an architect father. The family lives in a stepped house in Isogo-ku, Yokohama that Kun's father designed around a tree, where Kun spends his days playing with the family dog, Yukko, and his beloved toy train sets. When Kun is four, his sister Mirai, Japanese for "future", is born, and he is happy at first when his mother returns home with her. But he soon grows jealous when his parents focus all their attention on her, and has to be restrained from hitting her with one of his toy trains. He lashes out first at his mother, and then at his father when he becomes a stay-at-home dad working from home while his mother returns to work.

After one such tantrum, Kun stomps off to the house's garden, where he meets a strange man who claims to be the "prince" of the house. As the man endlessly whines about how he lost all the parents' attention when Kun was born, Kun realizes that the man is actually Yukko turned into a human. Kun even finds Yukko's tail on the man; when he removes it and places it on himself, he transforms into a dog. Later on, a now collected Kun tells his parents about how he had so much fun running around the house as a dog, and he relays Yukko's complaints about how they treat him.

Girls Day rolls around, and the family set up the traditional dolls to wish Mirai good luck. But they neglect to put the dolls away after the holiday ends. Frustrated again with their parents' focus on Mirai, Kun runs back to the garden. This time he meets a middle school aged girl who claims to be Mirai from the future. She has somehow gone back in time out of concern that every day the dolls are not put away adds one year before she can marry. After a lot of bumbling, future Mirai is able to put the dolls away with help from Kun and humanized Yukko.
Posted by anim8trix at 12:00 AM