Honkai Impact 3rd
▶ Watch the Anime
Honkai Impact 3rd is a gacha, free-to-play 3D action role-playing mobile game developed by miHoYo. It is the third entry in the Honkai series and spiritual successor to Honkai Gakuen, using many characters from the previous title in a separate story. 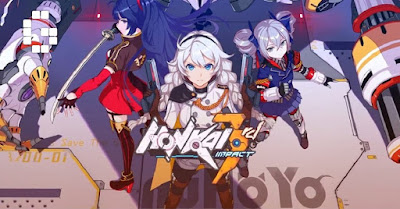 Honkai Impact 3rd is set in an alternate version of Earth, plagued by catastrophes resulting from "Honkai" (in Chinese translates as "Chaos", while in Japanese, it is said "Houkai".). Honkai is largely viewed as a malevolent force with a will of its own, able to corrupt humans into undead creatures, manifest itself in the form of various monsters, and select various individuals known as "Herrschers" to imbue with god-like powers able to trigger apocalyptic events. The Honkai is a cyclic phenomenon, returning to end civilization on Earth each time it gets too advanced - the Previous Era ended 50,000 years prior to the game's start, after the 14th Herrscher defeated humanity.

In the present day, various global factions exist to combat or take advantage of the power of Honkai. These include "Schicksal", a European-based peace keeping organization that deploys human warriors known as Valkyries to combat the Honkai; "Anti-Entropy", formerly the North American branch of Schicksal that objected to the use of human soldiers in favor of mechanized robots; and "World Serpent", a shadow organization manipulating events since the end of the Previous Era.

Prior to the story's start, three Herrscher awakenings (or "Impacts") have occurred in the Current Era: the Herrscher of Reason who became the leader of Anti-Entropy instead of fighting humanity, the Herrscher of the Void who was sealed away by Schicksal under mysterious circumstances, and the Herrscher of Lightning who was prevented from fully awakening and sent to train her powers as a Valkyrie at Schicksal's St.Freya school. 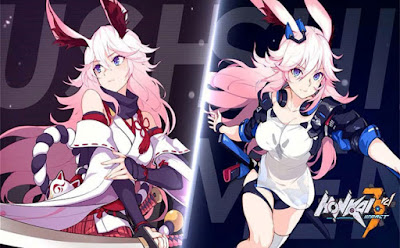 The game's story starts with three Valkyries-in-training (Kiana Kaslana, Mei Raiden, and Bronya Zaychik) boarding the Selene, a hostile flying battleship. The three take control of the battleship, then subdue Bronya when she is abruptly controlled malevolently. Following the successful mission, the girls take a graduation exam, during which a mysterious voice contacts Kiana and informs her of her lost parents, Siegfried Kaslana and Cecilia Schariac.

The Valkyries then dispatch to Schicksal's Oceania Branch to recover the Gem of Desire following a local Honkai Eruption that decimated the area. The trio discovers Wendy, who was implanted with the Gem of Desire, and learn that Wendy triggered the Honkai Eruption due to a hatred of Schicksal, which had crippled Wendy. Bronya is controlled again and attacks, causing Wendy to transform into a Herrscher. Although Mei and Kiana are able to subdue both girls, Anti-Entropy forces appear and Bronya kidnaps Wendy and Mei. The Valkyries subsequently track Anti-Entropy to the hijacked ME Corp with Bronya's assistance. There, Bronya destroys the biochip in her brain to free herself from Cocolia's control and enable the Valkyries to escape, but leaving Wendy behind.

Searching for a way to revive Bronya, Theresa Apocalypse creates a virtual datascape to find data on the biochip. Kiana is transported to a recreation of Siberia during the year 2000 in the midst of the 2nd Honkai War. Kiana meets virtual recreations of her parents, Siegfried and Cecilia, and while Siegfried is badly injured, Kiana and Cecilia team up and successfully defeat a recreation of 2nd Herrscher, Sirin. Upon Sirin's defeat, it is revealed that the events that Kiana experienced were a hallucination created from Kiana's desires by Sirin. Fu Hua captures Kiana and takes her to Schicksal HQ. 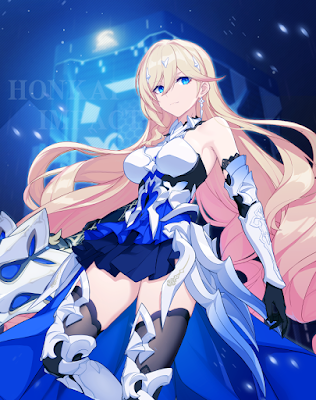 Theresa, Mei, and Himeko ally with Anti-Entropy forces and storm Schicksal HQ to save Kiana, breaching its defenses with the Selene and the Hyperion. While the Valkyries are successful in infiltrating Schicksal HQ, Rita Rossweisse and Fu Hua captures Himeko and Tesla. Otto Apocalypse successfully reawakens Sirin using Kiana's body as a host. Sirin dispatches Mei, Theresa, and the Anti-Entropy forces and engages Fu Hua in combat, stealing the 3rd Herrscher's power in the process. Himeko and Tesla, with Fu Hua's help, obtain a vial of anti-Honkai serum and a prototype battlesuit imbued with the Herrscher of Flames' power. Himeko dons the battlesuit and engages Sirin, fighting her to a standstill. Einstein uses the Selene's cannon on Sirin, forcing her to retreat into "Imaginary Space" with Himeko being pulled in as well. Himeko duels with Sirin in the Imaginary Space and injects the anti-Honkai serum into Sirin, causing her to revert to Kiana. Suffering massive losses, the remaining Valkyries and Anti-Entropy mechs retreat, and the world is left devastated in the wake of Sirin's attack. Himeko and Kiana both go missing.

Four months after Sirin's attack, Mei, Theresa, and Bronya attempt to meet with an intel dealer named Gray Serpent in Arc City who claims to have seen the Herrscher of the Void, unaware that Otto Apocalypse had dispatched Rita to obtain his information as well. Rita seems to kill Gray Serpent and steals his cybernetic implants, leading the Valkyries to capture a cyborg girl called the Ningyo. Before they can extract the Ningyo's information, Rita intercepts the Valkyries, steals the data, and formats the Ningyo's memory. While Einstein and Tesla attempt to retrieve the Ningyo's lost memories, the team is contacted by Cocolia, who convinces them to help find the Gem of Desire. Gray Serpent, seeking payment for the Valkyrie's theft of the Ningyo, hacks into the Selene. When Bronya follows Gray Serpent into virtual space, he traps Bronya in a data labyrinth formed from her memories to deter her. Bronya is able to escape, though she witnesses a record of the 1st Herrscher, Welt Young, and Einstein battling the World Serpent, who is sealed within the Sea of Quanta.

Bronya, Theresa, and Einstein travel to The Deep, where Bronya is reunited with Cocolia and childhood friends Rosalia and Liliya. Cocolia informs the trio that the Gem of Desire was lost in the Sea of Quanta, and must be retrieved. While Einstein prepares to enter the Eye of the Deep, a portal leading to the Sea of Quanta, Bronya attempts to reconcile with Cocolia. When Einstein discovers Cocolia scheming with Gray Serpent, Gray Serpent attacks Einstein and she vanishes. A swarm of Honkai emerges from the Eye of the Deep and attacks, leading Bronya to dive into the Sea of Quanta alone. In the Sea, Bronya is greeted by Joachim, a fragment of Welt Young. Joachim sends Bronya to multiple pocket universes as a test, during which Bronya is reunited with Seele Vollerei (Bronya's childhood friend who became stuck in quantum state following a failed X-10 Project years ago). In efforts to guide Seele out of the quanta, they resolve to escape together.

After clearing some honkai beasts and being separated, Seele and Bronya reunite and try to escape the labyrinth. The two girls reach the edge of the Quanta but are caught by tentacles. Bronya makes a sacrifice and cuts the tentacles binding Seele, succumbing to the tentacles herself. However, Seele dislikes her powerlessness and the Dark Seele (Velonia) finally agrees to lend her power to Seele, and they use their combined power to rescue Bronya.

Back to Kiana; after recapturing control of her body, she has been living in exile alone in the Arc City in order not to hurt others with the Herrscher personality. One night, she is fighting with Honkai beasts when Sirin seeks the opportunity to torment and brainwash Kiana, attempting to reawake the Herrscher. Fortunately, Fu Hua reaches Kiana's mind and drive Sirin away. Kiana holds hatred towards Fu Hua at first, but Fu Hua tells Kiana that their spirits are combined forever due to the power of Key of Deity, and that Kiana must learn to control the Herrscher power by herself. Under Fu Hua's training, Kiana finally succeeds, and returns to fighting against Honkai in Arc City. 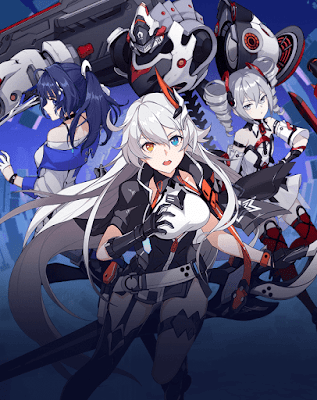