Here's our first full look of The Hobbit's Smaug 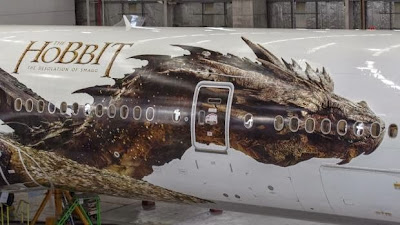 We finally have our first, full look at the namesake dragon in The Hobbit: Desolation of Smaug — though it’s not exactly what we expected. The trailers and footage shown off so far have done a good job of keeping the look of the beast, voiced by Benedict Cumberbatch, under wraps. But thanks to a new cross-promotion with Air New Zealand, the veil of secrecy has been lifted. To help promote the trilogy (which was filmed in New Zealand), the airline is painting a massive version of Smaug of the side of an airplane — and it’s freaking awesome. Yeah, that’s right: When you see this airplane flying, it’ll literally have a dragon wrapped around it. In addition to the pic above, the airline has also released a nifty time-lapse video showing just how much work it took to get that badass dragon up there, and it’s amazing the effort involved to make this happen.
Posted by anim8trix at 12:00 AM