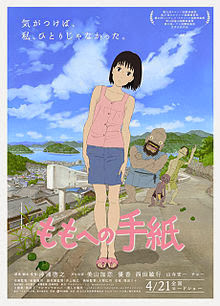 [Source: AnimeNewsNetwork] Hiroyuki Okiura and Production I.G's A Letter to Momo film won the Second Children Jury's Prize in the Animated Feature Film category at the 30th annual Chicago International Children's Film Festival (CICFF) held October 26 to November 3. First prize was awarded to Thomas Bodenstein's Knight Rusty from Germany.
A Letter to Momo follows a girl named Momo who struggles with her father's sudden passing and her move to the countryside. Momo finds an otherworldly surprise at her new home. This film is Okiura's first return to the proverbial director's chair since Jin-Roh in 2000.

The film held its world premiere at the Toronto International Film Festival in September 2011, and it opened in Japan on April 21. The film received the Grand Prize for Best Feature Film at last year's New York International Children's Film Festival and won the main prize in the "Feature film" category at the Czech AniFest, Best Animated Film at at the 6th Asian Pacific Screen Awards, and is currently nominated for an Annie Award.

GKids screened A Letter to Momo film at the Laemmle NoHo 7 theater in North Hollywood last month. The film ran for one week in this Los Angeles County theater to qualify for the Academy Awards consideration.

The festival also screened Makoto Shinkai's Children Who Chase Lost Voices.
Posted by anim8trix at 12:00 AM