LUPIN III
[Source: AnimeNewsNetwork] The story will follow Lupin and his partners in crime before they became a gang. They will infiltrate the high security of the Ark of Navarone, a gigantic fortress-like safe, to lay claim to the Crimson Heart of Cleopatra within. It is said that whoever possesses this treasure shall "unite the world." 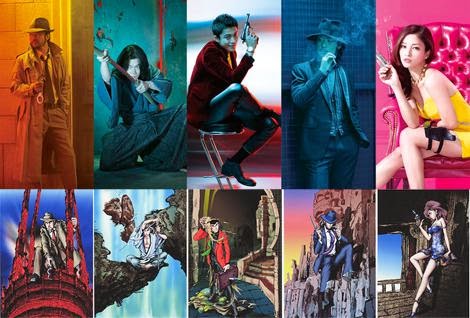 The first live-action adaptation of Lupin III in four decades will open on August 30. The movie began filming on October 3 and finished principal photography on December 26. The production shot in Japan, Thailand, Hong Kong, Singapore, and the Philippines.

The film is now in the middle of the final steps of editing, and the staff aims to complete post production and the film itself at the end of June. Ryuhei Kitamura (Azumi) is directing the film, and Mataichirō Yamamoto wrote the script.
Posted by anim8trix at 12:00 AM