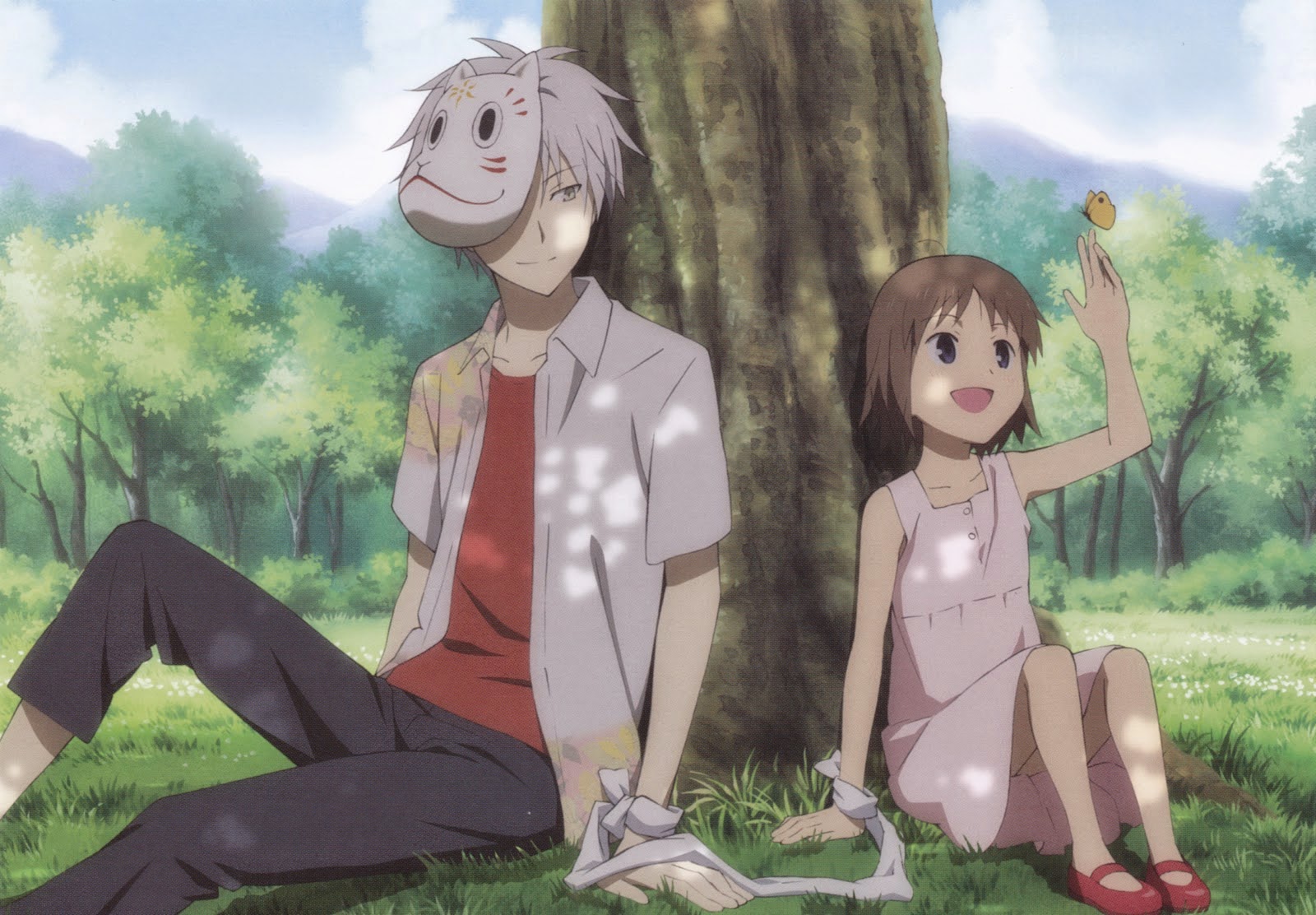 Hotarubi no Mori e
The original Hotarubi no Mori e shōjo manga and subsequent film tell the story of a six-year-old girl named Hotaru Takegawa, who gets lost in a forest inhabited by a yamagami, or mountain spirit, as well as yōkai (strange apparitions from Japanese folklore). She is found by a mask-wearing, human-like entity named Gin, who informs Hotaru that he will disappear forever if he is touched by a human. Gin then leads Hotaru out of the forest. Hotaru returns to visit Gin in the forest over the next few days and they become friends despite the limitations on their interactions. Although at summer's end she must leave Gin to return to the city and her studies, Hotaru promises to return to visit him every summer holiday. As the years go by, Gin hardly ages while Hotaru physically matures and grows closer to his apparent age. Upon reaching adolescence Hotaru begins to struggle with their budding romance and their uncertain future together, while Gin wishes he could touch and hold the young woman that Hotaru has become. When Hotaru reaches high school, Gin takes her on a date to a festival in the forest hosted by the spirits. The night ends in tragedy when Gin mistakenly touches a young boy who sneaked into the spirit festival, though before he disappears, he and Hotaru embrace and confess their love for one another. The story ends with Hotaru accepting her pain and moving on with her life. The 2011 anime film adaptation of the story follows all of the events from the manga, adding only a few additional scenes.

Hotarubi no Mori e Tokubetsuhen, published in 2011, expands on the original story with a short episode told from Gin's perspective. When Hotaru is a teenager, she shares some pudding with Gin before she leaves at the end of the summer. After Hotaru leaves, the yōkai attempt to cheer Gin up by bringing him a couple persimmons, one of the most prized treats on the mountain. Impressed with the taste, Gin thinks of sharing one of these persimmons with Hotaru next year. After discussing ways to preserve the persimmon with the yōkai and a spirit named Matsumino, Gin sets off to find ice on the highest mountain peak, but is disappointed to find none during the summer. When Gin returns scratched up from his fruitless search for ice, Matsumino feels sorry for him and offers to deliver the persimmon to Hotaru for him. However, not knowing where she lives, Matsumino gets lost and grows hungry. After he returns from his unsuccessful attempt to find Hotaru, Matsumino apologizes to Gin for eating the persimmon and Gin forgives him. The story concludes with Gin seeing Hotaru the following summer and wondering if he will be able to tell her about his feelings for her.
Posted by anim8trix at 12:00 AM