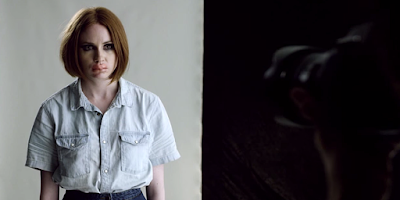 C O N V E N T I O N A L
Directed by Karen Gillan
Fun Size Horror is a group of horror-loving filmmakers who strive to play with the genre in new and exciting ways. "Fun size" in this case denotes that most of what is produced under this banner are shorts. So the focus isn't so much on the complex narratives or detailed setups as much as it is on the blood and guts that make horror fun.

This year, one of the people who wrote, directed and starred in one of these shorts is Karen Gillan. Karen is obviously very familiar with genre filmmaking, having starred in Doctor Who and Guardians of the Galaxy on the sci-fi end, appeared in the underrated horror gem Oculus and even worked with my favorite modern horror director, Ti West, on a western called In a Valley of Violence.

In short -- Karen Gillan knows her stuff. And it shows.


"Conventional" centers on fictional B-movie scream queen Rachel Milligan and her complicated relationship with Axe Wound 2, the movie that made her (temporarily) famous. But really, though, Conventional is about the fickle nature of fame. Milligan sports painfully bloated collagen-infused lips curled into a fake smile and a pair of eyes that say "Kill me now." The only people who still seem interested in her are those who cosplay as her fictional slasher from Axe Wound 2, Stu Mac. Her fans love seeing her afraid, and she just loves being seen at all.
Posted by anim8trix at 12:00 AM