Pride and Prejudice and Zombies - The Movie 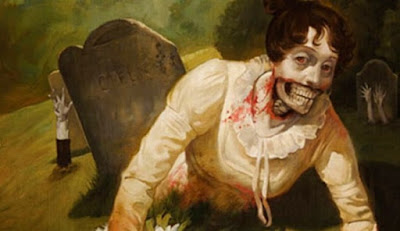 PRIDE and PREJUDICE and ZOMBIES
The story follows the plot of Pride and Prejudice, but places the novel in an alternate universe version of Regency era England where zombies roam the English countryside. Described as the "stricken", "sorry stricken", "undead", "unmentionables", or just "zombies", the deceased ancestors of England are generally viewed by the characters as a troublesome, albeit deadly, nuisance. Their presence alters the original plot of the story in both subtle and significant ways: Messages between houses are sometimes lost when the couriers are captured and eaten; characters openly discuss and judge the zombie-fighting abilities of others; women weigh the pros and cons of carrying a musket (it provides safety but is considered "unladylike").

Elizabeth Bennet and her four sisters live on a countryside estate with their parents. Mr. Bennet guides his daughters in martial arts and weapons training, molding them into a fearsome zombie-fighting army; meanwhile, Mrs. Bennet endeavours to marry the girls off to wealthy suitors. When the wealthy and single Mr. Bingley purchases a nearby house, Mrs. Bennet spies an opportunity and sends the girls to the first ball where Bingley is expected to appear. The girls defend the party from a zombie attack, and attraction sparks between Mr. Bingley and the eldest daughter Jane Bennet. Elizabeth clashes with Bingley's friend, the haughty monster-hunter Fitzwilliam Darcy.

The Bennets are shaken when Bingley and his companions suddenly abandon his country home and return to the walled fortress city of London with little explanation. When the local militia arrives in town to exhume and destroy dead bodies, Elizabeth becomes friendly with one of the soldiers, George Wickham, who tells Elizabeth that Darcy cheated Wickham out of an inheritance.

Elizabeth's dislike of Darcy intensifies when she learns that Darcy plotted to separate Bingley from her sister Jane. Elizabeth vows to avenge the slight to her family by killing Darcy, and she is afforded that opportunity when he appears unannounced at the cottage where she is visiting her newlywed friend Charlotte (who has been secretly bitten by a zombie and is slowly turning into one herself). Before Elizabeth can fetch her katana and behead him, Darcy surprises her by proposing marriage. The scene culminates in a vicious verbal and physical fight, in which Darcy is wounded. He escapes with his life and writes a long letter to Elizabeth explaining his actions. He separated Jane and Bingley out of fear that Jane had contracted the "mysterious plague" and with regard to the allegedly wronged soldier Wickham, Darcy explains that Wickham had attempted to elope with Darcy's younger sister to take her considerable fortune – this was the "inheritance" that Wickham had claimed. Elizabeth realizes that she has judged Darcy too harshly, and is humbled. Darcy realizes that his arrogant nature encourages people to believe the rumors about him, and resolves to act more appropriately.

Elizabeth embarks on a trip around the country with her aunt and uncle, fighting zombies along the way. At Pemberley she encounters Darcy, who repels a horde of zombies. Darcy's changed attitude and mannerisms impress Elizabeth and lead her to consider reconciling their relationship; her hopes are dashed when her younger sister Lydia elopes to London with Wickham. The Bennet family fears the worst, but receive word that Wickham and Lydia have married, following an "accident" that has rendered Wickham an incontinent quadriplegic. After visiting the Bennets, the couple adjourns to Ireland. Elizabeth discovers that it was Darcy who engineered the union, thus saving the Bennet family from ruin. Meanwhile, Mr. Collins who previously married (the secretly-plague-stricken) Charlotte Lucas, realizes she has turned into a zombie, and hangs himself, after beheading and burning Charlotte.

Darcy and Bingley return to the countryside, and Bingley resumes courting Jane. Elizabeth hopes to renew her relationship with Darcy, but his aunt, the Lady Catherine, interferes, insisting that her daughter Anne is a better match for her nephew. Lady Catherine challenges Elizabeth to a fight to the death, intent on eliminating the competition, but Elizabeth defeats Catherine and later her cadre of ninjas. Elizabeth spares Catherine's life. Darcy is touched by this gesture, and returns to Elizabeth. They cheerfully wipe out a dozen zombies (their first battle as a couple), are married, and begin a long and happy future together, insofar as the ever-present threat of zombie apocalypse permits it.
Posted by anim8trix at 12:00 AM