REBELS are talking about a Revolution 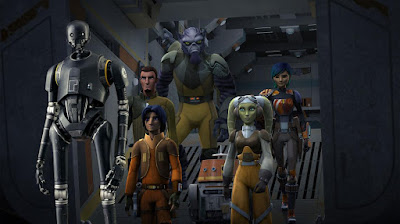 STAR WARS: REBELS
[Source: Syfy] The rebellion starts here! Prepare to get all kinds of excited, because Disney XD has released a new one-minute trailer for season four of the CGI animated series, Star Wars Rebels.
In just 60 seconds of the trailer, we learn how the rebellion of the Ghost crew first got started, with a small group of them willing to stand together. This final season will see a number of storylines finally get resolved, as well as how it will all link into Rogue One and A New Hope.


The past three seasons of the series have followed the events that occurred after the demise of the Galactic Republic in Star Wars Episode III: Revenge of the Sith. Something tells us that in this final season, we'll get to see one almighty battle between the Rebellion and the Grand Admiral Thrawn and the Galactic Empire.

Star Wars Rebels will be hitting our screens again October 16.
Posted by anim8trix at 12:00 AM