Start watching the exciting anime series: Made in Abyss and Princess Principal!
ANIME DESCRIPTIONS ARE BELOW
10:15 - 11:05    Gamers! 9-10 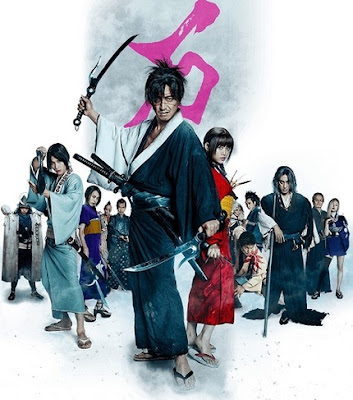 Blade of the Immortal
Live-Action Movie
Plot Summary: [Source: Wikipedia] Blade of the Immortal follows the deeds of Manji, a skilled samurai who has a decisive advantage: no wound can kill him, except for a rare poison. In the past, his criminal actions led to the death of 100 other samurai (including his sister's husband). He becomes immortal at the hand of an 800-year-old nun named Yaobikuni, and is compelled by the death of his sister to accept the quest that will end his agelessness. He has vowed to make amends by killing 1000 evil men, and until he does Manji will be kept alive by "sacred bloodworms" (血仙蟲 kessen-chū), remarkable creatures that allow him to survive nearly any injury and reattach severed limbs even after hours of separation. They work by sacrificing themselves to seal the wound - they're worms that were bred to be as close in their chemical and physical make-up to humans as you can get without being human. They cannot handle regrowth on a large scale, but, for example, can reattach a severed limb or seal a hole in the brain.