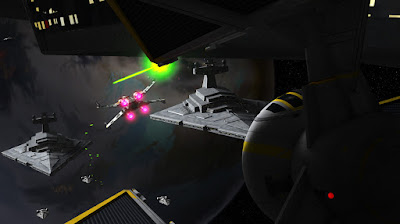 STAR WARS: REBELS
"Rebel Assault", the final episode of 2017 and the winter finale of Rebels, promises to be a nail-biter as Hera leads the attack against Grand Admiral Thrawn. The big question is, who will make it out alive and who won't?

The episode airs Monday, November 13th at 9 pm ET/PT and then we'll have to wait until early 2018 for more -- but this season has certainly delivered, so you can bet the rest of the season is going to be epic. Especially when you consider how much Rebels has to do in these latest episodes.

During its four seasons, Rebels has connected with specific characters throughout the Star Wars saga; Obi-Wan Kenobi, Ahsoka Tano, Darth Maul, Vader just to name a few. Dantooine got a mention and the Rebels are currently on Yavin IV, two planets that get a mention in Star Wars: A New Hope. We've seen Saw Gerrera, but it was before he went to Jedha. Additionally, the battle of Scarif and the events of Rogue One haven't happened yet. But we know Hera, Chopper, and the Ghost were at the Battle of Scarif.

Thanks to Rogue One, we know Hera and Chopper are alive, but there's no mention anywhere in the rest of the Saga of any other members of the Ghost crew, especially Kanan and Ezra. Somewhere between now and the end of the series, we'll learn what happens to each of these characters and hopefully have a good idea of where they're headed next.

It's very likely this episode will end on a cliffhanger, but that's one of the things that makes Star Wars so fun -- there's always more to the story.