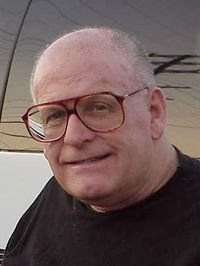 FRED PATTON
Legendary Anime/Manga Pioneer in the U.S.
(1941 - 2018)
[Source: ComicsBeat, written by author Heidi MacDonald] Comics and animation lost another key figure this week. Fred Patton, a protean champion of  early anime/manga fandom passed away at age 77 this week. He had been confined to a nursing home after a stroke in 2005, but continued writing and pursuing his interests in anime.
Until then he wrote widely about anime, and you’ll find his byline in many of the same old fanzines I wrote for back in the day.

All The Anime has a fine obituary, including Patton’s key role at Streamline Pictures, one of the first companies to bring Anime to the US:

When Fred turned 50, Carl Macek lured him away from his real-world job into the world of movie-making. Fred became the first employee of Streamline Pictures, with many of his early amateur scripts forming the basis for some of Streamline’s pro releases. Inevitably, he would lock horns with Macek, who would change the dialogue beyond what Fred considered to be a reasonable nuance. Fred would warn him that fandom wouldn’t like it, and as Macek later admitted, Fred was often right. However, Fred also had a fine grasp of the politics of fandom, and was instrumental in decisions designed to avoid what today might be called flame-wars. It was he who brought up the fact that the subject of the first Lupin III film, The Mystery of Mameux, had been so consistently mistransliterated as Mystery of Mamo by American fandom that correcting it would only lead to protests.

Many remembered Patton on social media: 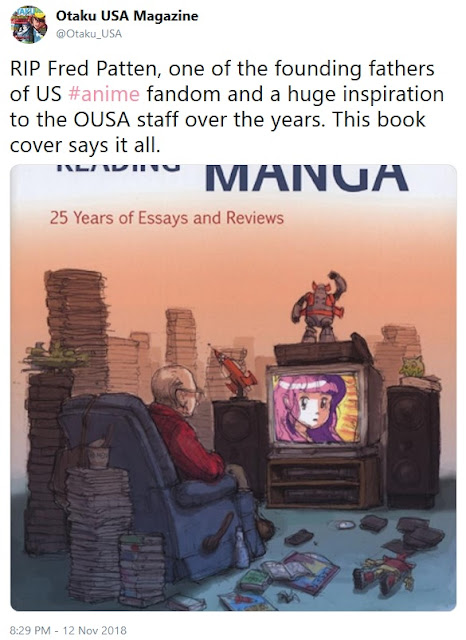 Fred was a regular in my young fan days in Southern California, and I would always see him at Comic-Con. We actually owned the same shirt emblazoned with Burne Hogarth’s Tarzan, and he wore his for many years after I stopped wearing mine. We’d always joke about it. He was a good guy and very instrumental in the fandom of the day.
Posted by anim8trix at 12:00 AM