The Game of Thrones is finally over... 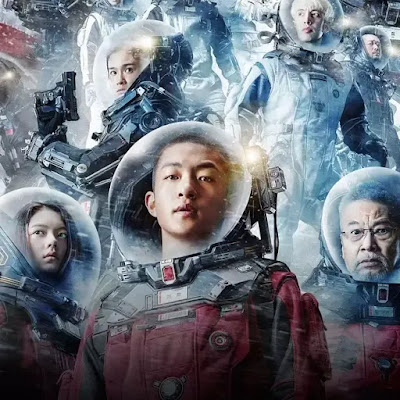 THE WANDERING EARTH
Plot Summary: [Source: Wikipedia] In the year 2061, the Sun has aged and is about to turn into a red giant, pushing the nations of the world to consolidate into the United Earth Government, a world government, to initiate a project to move the Earth out of the Solar System to the Alpha Centauri system, in order to preserve further human civilization. Enormous thrusters running on fusion power are built across the planet to propel the Earth. Human population is reduced severely due to catastrophic tides that occur after the planetary engines stop Earth's rotation, and later as the planet moves away from the Sun, much of the surface is frozen due to lowered temperatures, forcing humans to live in vast underground cities built adjacent to the engines.

At the beginning of the film, Liu Peiqiang, a Chinese astronaut, promises to his son Liu Qi of his eventual return before his mission to a space station that will help Earth navigate as it moves out of the Solar system, and hands guardianship of his son over to his father-in-law Han Zi'ang.

Seventeen years later, Liu Peiqiang's mission is about to end and he will soon return to Earth. To celebrate Chinese New Year, an adult Liu Qi brings adopted sister Han Duoduo on a trip to the surface in a truck they stole using Han Zi'ang's clearance as a trucker. They are arrested, meet a fellow prisoner named Tim, and are joined by Han Zi'ang after an unsuccessful attempt to bribe the prison warden into releasing them.

As Earth passes by Jupiter to make use of gravity assist, Jupiter's gravitational spike causes devastating earthquakes that disable many thrusters across the globe and pull the Earth dangerously close. The four escape amidst the chaos and attempt to make their way out in Han Zi'ang's truck, but the truck is requisitioned for a rescue mission by the military rescue team CN171-11; they are to transport a lighter core, an engine component, to restart the planetary thruster engine in Hangzhou, supervised by soldiers led by Wang Lei. In the remnants of Shanghai, they lose their vehicle, and while transporting the component up the ruins of the Shanghai Tower Han Zi'ang is killed. With news that the Hangzhou thruster was fully compromised and the city was completely destroyed, the group is downcast. However they later find a new vehicle where the on-board engineer, Li Yiyi, convinces them to transport a lighter core to repair a larger planetary thruster engine in Sulawesi.