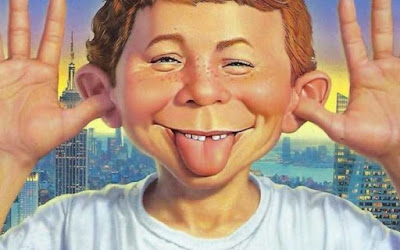 MAD comes to an END
[Source: animesuperhero] The Hollywood Reporter reports that MAD Magazine will no longer publish new content after 67 years of satirizing anything from entertainment to politics. According to DC Comics, the magazine will no longer be on newsstands after issue 9 appears in August. Issue 10 will be the last issue to feature new content, with future issues reprinting previous content and getting sold in comic book shops and mailed to subscribers.

MAD Magazine was originally published in 1952 by William M. Gaines for EC Comics, best known for publishing edgy comics like Tales From The Crypt and The Vault of Horror. It later became a magazine in 1955. The magazine launched the careers numerous cartoonists, including Dick DeBartolo, Don Martin, and Sergio Aragones. The magazine also gained renown for regular features like “Spy Vs. Spy,” and the classic fold-ins. It also inspired the late-night show MAD TV and the animated MAD cartoon series.

In 1955, their most iconic character Alfred E. Neuman was featured on the cover, ultimately appearing in more than 500 covers.
Posted by anim8trix at 12:00 AM