U  N  D  E  R  W  A  T  E  R
Kristen Stewart has fought vampires, evil queens and government agents, but in the 2020 action-thriller Underwater, the acclaimed actress takes a dunk and goes up against a deep sea monster. The first trailer for Underwater has arrived so dive in and check it out below.

The first thing that the Underwater trailer establishes is that this crew of underwater researchers is going to the very deepest parts of the ocean. The trailer doesn’t let us in on the specifics of their objectives or what they are studying, but all we need to know is that these characters are about as far as a person could possibly be on this planet from the nearest help or hope of rescue. That sets the stage for what’s to follow.

Something shakes the entire subterranean research laboratory and Kristen Stewart’s character Norah sees what has to be the most terrifying thing you could see in a place that deep underwater: a leak. The whole thing begins to flood and when the crew regroups, that’s when we get the first idea of what exactly might be going on. It seems that like the Dwarves in the mines of Moria, they “delved too greedily and dug too deep” and freed or awoke…something.

When the crew has to walk across the bottom of the ocean to survival, they must contend with the deep sea creature or creatures that are now awake. Unlike last year’s The Meg, and despite having comedian T.J. Miller as part of the cast, Underwater seems like it will largely eschew campiness. Instead it goes for a true sci-fi horror vibe and it was hard not to think of Ridley Scott’s original Alien while watching the trailer. 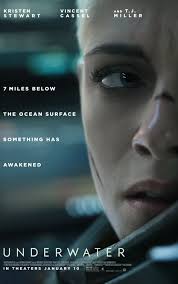