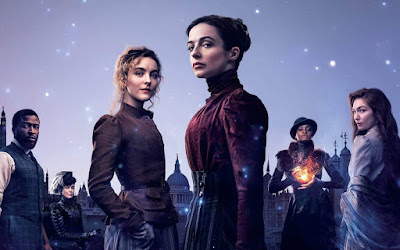 THE
✯   N     E     V     E     R     S   ✯
Society fears what it cannot understand. Experience the power of The Nevers, a new @HBO original series, this April 11, 2021, on HBOmax.
▶ Watch the Trailer
In the last years of Victoria’s reign, London is beset by the “Touched”: people — mostly women — who suddenly manifest abnormal abilities, some charming, some very disturbing. Among them are Amalia True (Laura Donnelly), a mysterious, quick-fisted widow, and Penance Adair (Ann Skelly), a brilliant young inventor. They are the champions of this new underclass, making a home for the Touched, while fighting the forces of… well, pretty much all the forces — to make room for those whom history as we know it has no place.
They, themselves are not called that [The Nevers] in the show. It's a phrase that's meant to evoke a sort of reaction to their oddity, to what is considered unnatural. The idea that you should never be like this, you should never have existed. Something is not the way it should be, and you don't have the right to have whatever weird power or ability that you have. And that idea, that some people are not of the natural order, is fascinating to me. I don't agree with it. But to me, it's one of those things where you take something negative, and you wear it as a badge of honor, basically. Certain things could never happen - they're happening. And the people they're happening to are taking their place in the world.
Posted by anim8trix at 12:00 AM