The Adventures Continue for This Isekai Saga! 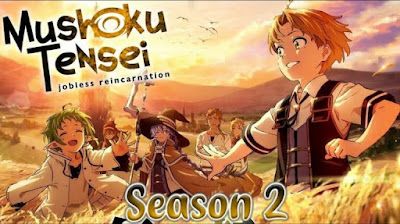 Mushoku Tensei
Season 2 Announced for 2023
An unnamed 34-year-old Japanese NEET is evicted from his home after failing to attend his parents' funeral. After some self-reflection, he concludes that his life is ultimately pointless. Still, he intercepts a speeding truck heading towards a group of teenagers in an attempt to do something noteworthy for the first time in his life. He pulls one of them out of harm's way just before he dies. He awakens in the body of a baby and discovers he has been reincarnated in a world of sword and sorcery. He resolves to succeed in his new life, abandoning his previous identity in place of Rudeus Greyrat. Rudeus develops a strong affinity for magic due to his aptitude and early training. He becomes a student of demon magician Roxy Migurdia during his youth, a friend of demi-human Sylphiette, and a teacher of magic to noble heiress Eris Boreas Greyrat. The story chronicles his new life's highlights as he attempts to overcome the failures of his previous one.
▶ Watch the Trailer for Season 2
Posted by anim8trix at 12:00 AM