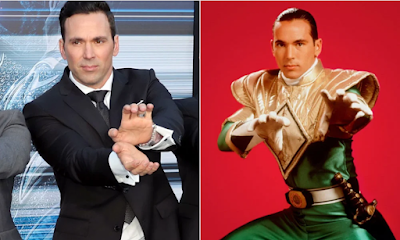 JASON DAVID FRANK
(September 4, 1973 – November 19, 2022)
Actor who played the Green Power Ranger died at age 49
Jason David Frank, who played the Green Ranger and later the White Ranger on the popular 1990s children's television show “The Mighty Morphin Power Rangers,” died on Saturday. He was 49. Justine Hunt, his manager, confirmed his death on Sunday. It was initially reported he died by suicide. Details to be released soon.

Frank was cast in the role of Tommy Oliver, the Green Ranger. The role was set for 14 episodes. Due to the popularity of the character, he was brought back as the White Ranger and the new leader of the team.

Frank was supposed to be the lead character Adam Steele in VR Troopers (originally called "Cybertron") and shot a pilot episode before being called back to Power Rangers. According to both Frank and Brad Hawkins, Hawkins' character was to replace Tommy Oliver originally as the White Ranger on Power Rangers. However, due to Tommy Oliver's popularity with Ranger fans, Frank was brought back, with Tommy Oliver becoming the White Ranger. Hawkins would take over on VR Troopers. The character Adam Steele was renamed Ryan Steele. After three seasons, Mighty Morphin Power Rangers transitioned into Power Rangers Zeo. The transition is part of the annual Ranger suit change to match the annual change of the Super Sentai series. Frank's character became the Red Zeo Ranger (also called Zeo Ranger V).

After he left the series in 1997, Frank came back to Power Rangers as the Red Zeo Ranger in 2002 for the special 10th-anniversary episode, entitled "Forever Red", in Power Rangers Wild Force, which brought back ten former Red Rangers, and reunited him with Austin St. John.

This was also the case during "Forever Red" of Wild Force. Being the Black Dino Ranger was a favor to Douglas Sloan. He joked that Saban and Disney are "both the same, they're cheap" but that he was impressed with the production crew for Dino Thunder.

Frank reprised his role as Tommy Oliver (who in turn was the Green Ranger for the episode) in the season finale of Power Rangers Super Megaforce. Frank expressed interest in developing a Green Ranger solo series or feature film after an encounter with Stan Lee at a comic book convention.

Frank had a cameo role in the 2017 film Power Rangers, as a citizen of Angel Grove, alongside fellow Power Rangers actress, Amy Jo Johnson. In 2018, he reprised his role as Tommy in episode 10 of Power Rangers Super Ninja Steel for the 25th anniversary of Power Rangers. In 2022, Frank revealed that he retired from the franchise.