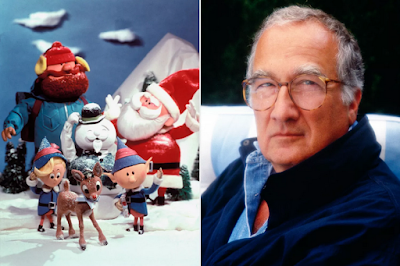 JULES BASS
(September 16, 1935 – October 25, 2022)
Producer, Director, and Composer of
Iconic Holiday TV Specials, Dies at 87
Jules Bass, who helped make Rudolph the most famous reindeer of all and bring Frosty to life during a prolific animation career that shaped the holiday TV viewing traditions of generations of youngsters, died Oct. 25 at a senior living facility in Rye, N.Y. Wp Get the full experience. Choose your plan ArrowRight A family member, Jennifer Ruff, confirmed the death but did not cite a cause. Mr. Bass was half of the production duo Rankin/Bass, an animation juggernaut he formed with a partner, Arthur Rankin Jr., in 1960. Over the next several decades, collaborating with animators and puppet-makers in Japan, Rankin/Bass produced a raft of movies that became staples of American childhood. Few people have come of age since the 1960s without watching and re-watching the stop-motion puppetry of “Rudolph the Red-Nosed Reindeer,” which first aired on NBC in 1964, or the traditionally animated “Frosty the Snowman,” which debuted in 1969. The story of Rudolph’s luminescent nose, his rejection by the more ordinary members of his herd and his heroic service to Santa one foggy Christmas Eve was based on a popular song written by Johnny Marks and recorded by Gene Autry in 1949. (Marks, Rankin’s neighbor, had borrowed the idea for the song from a children’s book by Robert L. The Rankin/Bass television version featured Burl Ives singing the title song and other Marks numbers that entered the modern Christmas canon, among them “Silver and Gold” and “A Holly Jolly Christmas.” Writer Romeo Muller expanded upon the story of Rudolph to introduce Hermey, the elf who yearns to be a dentist, and the Island of Misfit Toys. The result, rendered in the halting stop-motion animation style that Rankin/Bass called Animagic, was an instant phenomenon — a classic in the category of the later TV movies “A Charlie Brown Christmas” (1965) and “How the Grinch Stole Christmas” (1966). Such was the nostalgia their production evoked that when original Rudolph and Santa puppets were placed for auction in 2020, the wood, felt and wire relics were expected to fetch between $150,000 and $250,000, according to the New York Times. Rankin/Bass found a niche adapting Christmas songs to the screen and applied the formula again with success in “Frosty the Snowman.” In their TV version, Jackie Vernon voices Frosty with Jimmy Durante singing an indelible version of the title song by Walter “Jack” Rollins and Steve Nelson. Working with composer Maury Laws, Mr. Bass helped write the music for Rankin/Bass productions including 1970′s “Santa Claus Is Comin’ to Town,” with narration by Fred Astaire and Mickey Rooney as the voice of Kris Kringle, and 1974′s “The Year Without a Santa Claus,” in which Rooney reprised his role as Santa.
“The Year Without a Santa Claus” gave viewers the Heat Miser and the Snow Miser, with their memorable musical motif. “Maury usually wrote the music and Jules would write the lyrics, which would typically move the plot along, but this wasn’t always the case,” Rick Goldschmidt, a scholar of the productions of Rankin/Bass, wrote on his blog. He cited the example of the song “One Star in the Night,” from the 1968 TV movie “The Little Drummer Boy,” for which Mr. Bass wrote the music. According to Goldschmidt, Rankin was the chief executive and primary director of Rankin/Bass productions, often working with animators in Japan while Mr. Bass oversaw voice actors and musicians in New York. The Rankin/Bass output was not limited to Christmas specials. The team also produced the feature-length stop-motion film “Mad Monster Party” (1967), the TV series “The Smokey Bear Show” (1969) and the Easter special “Here Comes Peter Cottontail” (1971), featuring the voices of Danny Kaye and Vincent Price. They received a Peabody Award for their animated TV movie “The Hobbit” (1977), based on J.R.R. Tolkien’s fantasy novel, and critical acclaim for the full-length animated movie “The Last Unicorn” (1982), with voice work by Jeff Bridges, Mia Farrow, Angela Lansbury and Alan Arkin. Writing in the Times, movie critic Janet Maslin described “The Last Unicorn” as “an unusual children’s film in many respects, the chief one being that it is unusually good.” “Children, except perhaps for very small ones, ought to be intrigued by it; adults won’t be bored,” she observed. “And no one of any age will be immune to the sentiment of the film’s final moments, which really are unexpectedly touching and memorable.” Later Rankin/Bass collaborations included the 1980s TV series “ThunderCats” and the 1987 TV movie “The Wind in the Willows.”
▶ Watch The Animagic World of Rankin/Bass
Posted by anim8trix at 12:00 AM