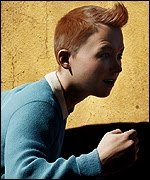 [Source: EmpireOnline.com] Steven Spielberg and Peter Jackson have chosen Empire to reveal the first look at The Adventures of Tintin: The Secret of the Unicorn. Headed our way next October, the film adapts the enormously popular books by Hergé in performance-captured, 3D form.

Our exclusive and specially-Weta-created cover is a riff on the iconic image of Tintin (Jamie Bell) and his dog Snowy picked out by a spotlight as they are running. Then we have a couple of stills from the film, one showing you Andy Serkis’ Captain Haddock and another with Haddock and Tintin adrift at sea and signalling for help.

“With live action you’re going to have actors pretending to be Captain Haddock and Tintin,” says Peter Jackson. “You’d be casting people to look like them. It’s not really going to feel like the Tintin Hergé drew. It’s going to be somewhat different. With CGI we can bring Hergé’s world to life, keep the stylised caricatured faces, keep everything looking like Hergé’s artwork, but make it photo-real.”

So what can we expect from the story? Here’s what Spielberg told us. “The first part of the film, which is the most mysterious part, certainly owes much to not only film noir but the whole German Brechtian theatre — some of our night scenes and our action scenes are very contrasty. But at the same time the movie is a hell of an adventure.”

The film also stars Simon Pegg and Nick Frost as Thompson and Thomson respectively (“When people first heard that bit of casting they thought that we’d gone barking mad,” says Jackson. Adds Spielberg, “The Thompson Twins can’t be clones of each other. Nick and Simon provided all the differences we needed to foil for each other. They have a wonderful moment in the movie where they start to have an argument about whose sidekick is whose.”) and Daniel Craig as Red Rackham. It also features Cary Elwes, Toby Jones, Mackenzie Crook and Daniel Mays.

And for those of you thinking really far ahead, what has Jackson got planned for his Tintin adventure if and when the planned sequel happens? “One of my favourites is The Seven Crystal Balls, so that’s the one I’ve always been thinking of,” he says. “I also really like the Eastern European ones, the Balkan ones like King Ottokar’s Sceptre and The Calculus Affair. I think it’s a terrific setting for a thriller, the weird Balkan politics and the mysterious secret service agents. I think the Moon ones are terrific, but they’d be good for the third or fourth Tintin film, if we get that far. We want to keep his feet on the ground just a little bit longer.”

For much, much more from Spielberg, Jackson and their entire cast, pick up the new issue of Empire, today. Or better still, order your copy online now!

For a full preview of this month's issue - click here.
Posted by anim8trix at 4:50 AM