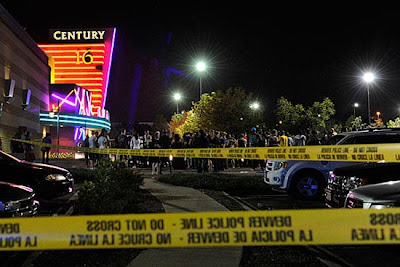 (Source: SyFy.com) All the buzz and excitement over The Dark Knight Rises turned to tragedy last night as 12 people were shot and killed in Colorado at a special midnight showing for the final film in Christopher Nolan's Batman trilogy.

The shooting started during a midnight showing of the film at a theater in Aurora, Colo., which was packed with fans eager to see the film early. But just as the movie started, a gunman burst in and began spraying the crowd with bullets and disorienting those in attendance with gas.

Approximately 50 people were injured, in addition to the dozen deaths.

The site was pure chaos according to eyewitness reports, and one man who was at the theater said the gunman planned his attack to coincide with a shootout in the film. As reported by The New York Times:

"We were watching a scene of the movie—it was a shootout scene, there were guns firing. Then loud bangs came from the right of the theater. Smoke took over the entire theater, and it was really thick and no one could really see anything. Me and my sister were sitting there wondering what was going on. Five people were limping, wounded, slightly bloody. I saw a girl who was pretty much covered in blood. It made me think the worst. A cop came walking through the front door before everyone was cleared up and before everything was completely under control holding a little girl in his arms, and she wasn't moving."

Police have the shooter in custody, and reports indicate he is a young man in his early 20s. The young man's apartment was also searched for explosives, though authorities have not released any additional information.

This is just absolutely tragic. Police don't know the man's motives as of yet, but considering the film deals with domestic terrorism in the form of Bane, it's leading to even more questions. The FBI says they do not believe the shooting was an act of terrorism, but instead a single-shooter crime:

"We're treating this as an active shooter investigation working with Aurora police. No indications at this early point in the investigation of any nexus to terrorism."

As the nation woke to the news this morning, an outpouring of condolences came from virtually everywhere. Among them, President Barack Obama:

"As we do when confronted by moments of darkness and challenge, we must now come together as one American family," Mr. Obama said. "All of us must have the people of Aurora in our thoughts and prayers as they confront the loss of family, friends and neighbors, and we must stand together with them in the challenging hours and days to come."

In the wake of the tragedy, the Paris premiere event for the film, scheduled for today and featuring the main cast, has been called off:

"Warner Bros. is deeply saddened to learn about this shocking incident. We extend our sincere sympathies to the families and loved ones of the victims at this tragic time."