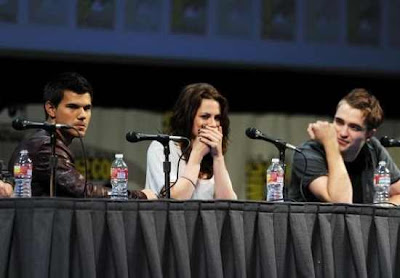 [Source: SyFy.com] Comic-Con hasn't officially begun, but the event is already making headlines. Unfortunately, there's nothing positive or great about why. Before massive crowds could descend upon San Diego, an unlucky attendee met a tragic end.

On Thursday, July 12, the cast of The Twilight Saga: Breaking Dawn—Part 2 will be in San Diego to promote their latest sequel. Twilight is always one of the hardest panels to get into, which is why fans camp out days and nights in advance to snag a spot, and this year is no different.

In a sad report, it's been revealed that a 53-year-old Twilight fan named Gisella has died. While trying to move in line, she was struck by a vehicle at Fifth and Harbor. According to the police report, "The driver of the car that struck the pedestrian stayed on the scene."

The police were contacted 9:20 a.m. PST, and when the ambulance arrived the victim had severe head trauma and was bleeding profusely. Unfortunately, the damage was too much and she succumbed to her injuries at the hospital.

There's currently a Twitter petition being passed around asking for a moment of silence at the panel to honor Gisella.

San Diego Comic-Con is a great event, but please—be careful!
Posted by anim8trix at 10:49 AM