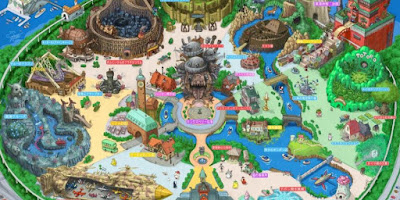 STUDIO GHIBLI PARK
[Source: blastr] Fans, start saving your dollars, and keep your eye on the price of yen. In 2020, we’ll be getting a theme park based on the works of Studio Ghibli, workplace of Japan's Walt Disney, Hayao Miyazaki.


According to Vice, the announcement was made by Ghibli producer Toshio Suzuki and Aichi prefectural governor Hideaki Oomura. The theme park will be housed in Aichi Prefecture, Japan, former site of the Expo 2005 World’s Fair. This is the site of a current (and well-regarded) Miyazaki experience: the home of Satsuki and Mei from My Neighbor Totoro.


JapanTimes writes that Ghibli Park will include a homage to My Neighbor Totoro, with “restage[d] situations and landscapes” from the 1988 film. And … that’s it, which means this announcement is light on details. (Vice says that Ghibli's other epics, like Spirited Away, will also be included.)


But there are some obvious experiences to be had from Totoro (about two girls exploring their new home and its surroundings), such as a cat bus ride and fun with a flying top. Here’s hoping for a full-on Studio Ghibli extravaganza. After all, who doesn’t want to ride in Howl’s Moving Castle? It's one of my geek dreams.


So until 2020, we’ll just have to content ourselves with visiting the Ghibli Museum in Tokyo and attending the 2017 Ghibli film festival.
Posted by anim8trix at 4:00 PM