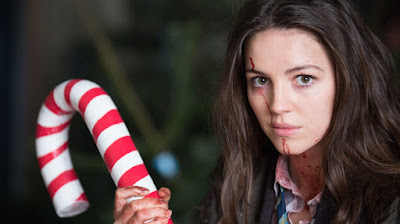 Anna and the Apocalypse
[Source: Syfy] The first teaser trailer for the upcoming zombie Christmas musical Anna and the Apocalypse has shambled its merry way online — and if you’re a fan of Shaun of the Dead and musicals, this one’s for you.
Directed by John McPhail (who also helmed the award-winning comedy movie Where Do We Go From Here?), Anna and the Apocalypse is in competition at this week’s Fantastic Fest in Austin, Texas, where it will have its world premiere. The movie stars Ella Hunt (Our Robot Overlords) as the titular heroine, Mark Benton (The Imaginarium of Doctor Parnassus) as her dad, Tony, and Game of Thrones alum Paul Kaye as the movie's wicked big bad Savage. Rounding out the cast are newcomers Malcolm Cumming, Sarah Swire, Christopher Leveaux, Ben Wiggins and Marli Siu.

Based on the 2010 BAFTA-winning short Zombie Musical directed by the late Ryan McHenry (McHenry shares a writing credit with Alan McDonald) — which you can also watch below — Anna and the Apocalypse follows a group of high school friends as they try to stay alive (all the while fighting, dancing and singing) during a zombie apocalypse (at Christmas, no less) while an undead horde is in pursuit.

While making their way to the only safe place they know: their high-school, they soon discover that being a teenager is as difficult as surviving the end of the world… and it looks like the perfect movie with which to spread some good old fashioned holiday cheer to all genre fans out there.

[Below] The short film that started it all. This film got us a feature film deal with Black Camel Pictures (OUTPOST franchise, SUNSHINE ON LEITH), and won us a BAFTA. It's three years since we filmed it and we've moved on a lot as film makers, but with the feature in very late development we can finally show this to the world!
Posted by anim8trix at 12:00 AM