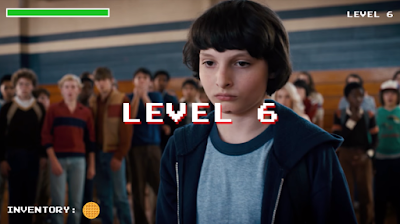 Game on, Season 1
SPOILER WARNING: Spoilers for
Stranger Things Season 1 below!
[Source: Syfy] Stranger Things just leveled up, and Season 2 hasn’t even crawled out of the dark yet.

For all of us impatient to know why Jonathan had something in his throat before last season vanished, we still won’t find that out until nearly Halloween, but Netflix is keeping us entertained (and making us really nostalgic for the era of huge glasses and bad fashion) with this Season 1 recap that plays out like an ‘80s video game.

Everything from the bleep-blip-bloop sounds to the pixelated prompts and icons are reminiscent of retro arcade games. It even has that power bar at the top that goes from green to yellow to red, depending on how much danger you're in. And when you level up, the previous level fades out in megapixels.

Like the show, there's an awesome element of humor here, especially if you remember playing games like this on Atari, or on your classroom’s Apple 2e. Remember how some games would tell you how many icons of something you needed with a plus-whatever, and then add them at the bottom of the screen? So does this one, except with Eggo waffles. The more Michael sneaks into his backpack for Eleven, the more “Inventory” goes up. Same goes for when the boys discover Eleven’s epic stash of chocolate pudding.

The "game" also adds or subtracts points for paranormal actions or incidents that could twist events one way or the other. When Dustin and the others try to get Eleven to levitate the Millennium Falcon, "Use your powers, OK?" types on the screen in a familiar 8-bit font ... until she gives them The Look and is awarded a "Sass Bonus."

Later, the game player is prompted to choose between "attack" and "surrender" when a van almost flattens Will’s junior high detective party. But upon the "attack" command, Eleven sends all three tons soaring overhead. A +500 bonus is then awarded when she takes down a bully in the most embarrassing way ever. And when Lucas hits the Demogorgon in the … I wouldn’t exactly call that a face ... but whatever it is, he nails it with his slingshot, and the move scores thousands of points.

While this recap is definitely a bonus, we still can't wait till Stranger Things 2 creeps up on Netflix on Oct. 27. Marathoning it in the dark may just be the best excuse ever not to have to deal with trick-or-treaters.
Posted by anim8trix at 12:00 AM