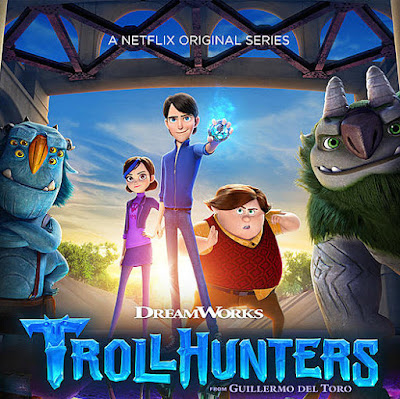 TROLLHUNTERS SEASON TWO
[Source: Syfy] After the vile Angor Rot was taken down last season, Netflix will soon return to Arcadia and head into the Darklands for Season 2 of Dreamworks and Guillermo del Toro’s Trollhunters. And now there's a brand new trailer to get us even more excited!
Trollhunters: Tales of Arcadia will venture deeper into the centuries-old clash between good (humans and trolls) and evil (trolls) as Jim Lake and his unexpected band of warriors face off against the terrifying trolls of the Darklands, who are not-so-terrifyingly called Gumm-Gumms. When the things in the shadows have glowing red eyes and way too many teeth, you need someone with that magic amulet on your side, though Jim might be a little too excited to go on another troll-hunting mission. Gnome Chomsky certainly isn’t.


The subterranean neon realm of these often grotesque creatures lights up once again with a new quest that takes Jim, Toby, Blinky, Claire, and Aaarrrggghh—who is totally not dead—into even scarier territory. Never mind other dark places when Arcadia itself is being wrecked by an evil army crawling up from the deep (though you have to admit their fluorescent armor is pretty badass). Someone has to stop the onslaught of destruction before it turns to more than just streetlights and parked cars getting smashed. It does help when one of your team members wields a portable warhammer and another has six eyes.

You can stream all 13 episodes of Tales of Arcadia starting Dec. 15, which is a Friday, so you can binge-watch all night and sleep in.
Posted by anim8trix at 12:00 AM