Mazinger Z on the Big Screen! 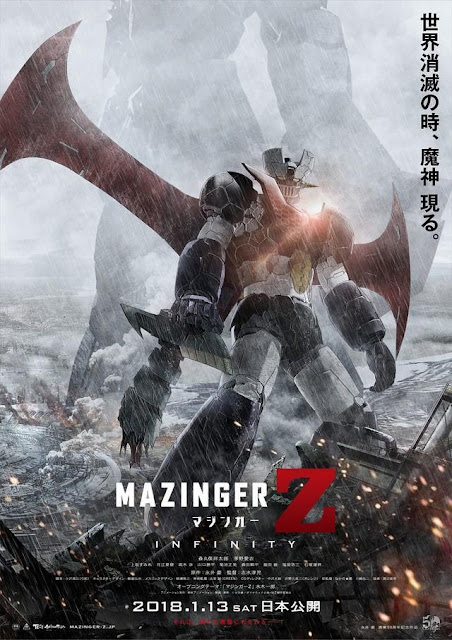 MAZINGER Z: INFINITY
Coming to Select Theaters
0 2   .   1 1   .   2 0 1 8
Mazinger Z is an enormous super robot, constructed with a fictitious metal called Super-Alloy Z (超合金Z Chōgokin Zetto), which is forged from a new element (Japanium) mined from a reservoir found only in the sediment of Mt. Fuji, in Japan. The mecha was built by Professor Juzo Kabuto as a secret weapon against the forces of evil, represented in the series by the Mechanical Beasts of Dr. Hell. The latter was the German member of a Japanese archeological team, which discovered ruins of a lost pre-Grecian civilization on an island named Bardos (or Birdos, although some inconsistent translations have identified the island as being the actual Greek island of Rhodes); the civilization was loosely based on the ancient Mycenae, and was called the Mycéne Empire in the series. One of their findings was that the Mycene used an army of steel titans about 20 meters in height (compare with the Greek legend of Talos). Finding prototypes of those titans underground which could be remote-controlled and realizing their immense power on the battlefield, Dr. Hell goes insane and has all the other scientists of his research team killed except for Professor Kabuto, who manages to escape. The lone survivor goes back to Japan and attempts to warn the world of its imminent danger. Meanwhile, Dr. Hell establishes his headquarters on a mobile island, and plans to use the Mechanical Beasts to become the new ruler of the world. To counter this, Kabuto constructs Mazinger Z and manages to finish it just before being killed by a bomb planted by Hell's right-hand person, Baron Ashura, a half-man, half-woman. As he lays dying, he manages to inform his grandson Kouji Kabuto about the robot and its use. Kouji becomes the robot's pilot, and from that point on battles both the continuous mechanical monsters, and the sinister henchmen sent by Doctor Hell.

MOVIE SYNOPSIS:
Ten years ago, the villainous scientist Dr. Hell led his wicked followers, known as the Underground Empire, in a struggle to destroy all of humanity. It was against these forces that the young hero Koji Kabuto fought, piloting the legendary super robot “Mazinger Z.” Koji’s victory stopped Dr. Hell’s evil plan and returned peace to the Earth. Now Koji has left the pilot seat behind and become a scientist in his own right, following in his father’s and grandfather’s footsteps. Yet an unexpected encounter deep under Mt. Fuji triggers an even greater threat to mankind than ever before and alters Koji’s destiny forever. With humanity’s fate in their hands, Koji and Mazinger Z face a choice between good…and evil. Audiences who attend the English subtitled premiere will also have the chance to receive an exclusive Mazinger Z: INFINITY mini-poster (limited quantities, while supplies last).

Click HERE to find a theater near you.
Posted by anim8trix at 4:03 AM