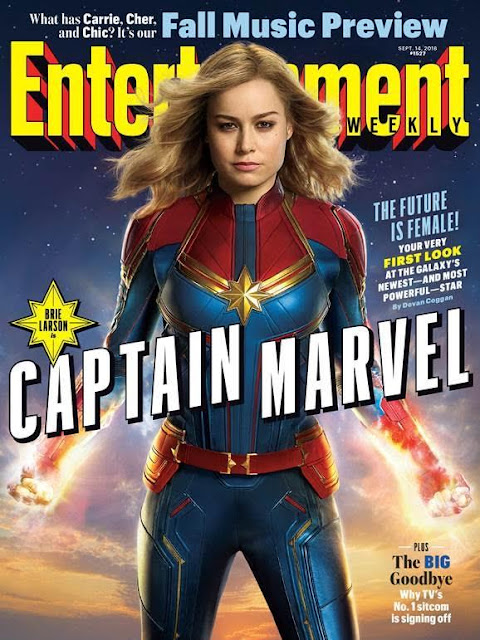 Get ready to meet the newest hero in the MCU, who also happens to be Marvel’s most powerful The first look at Marvel’s newest superhero, Captain Marvel played by Brie Larson, has arrived. Larson graces the cover of Entertaiment Weekly in the iconic Captain Marvel super-suit, which should be a relief to those of us who were less than pleased after seeing those set pics of her in black and green and we were all like… uh, what? Sooooo… phew.

While the movie only hits theatres next March, fans can now see Captain Marvel in all her glory with EW releasing a number of pictures including her alongside Jude Law’s character, Mar-Vell, the Kree solider at the head of Starforce, an elite Kree military team, which Captain Marvel AKA Carol Danvers joins having decided to leave Earth and embrace her super-people.

Unlike a traditional origin story, Captain Marvel will begin with Carol Danvers already having her superpowers, but she’ll need help getting them under control, making Mar-vell a very important part of her story. Speaking about their dynamic, Jude Law revealed to EW QUOTE “These extraordinary powers she has, he sees them as something of a blessing and something that she has to learn how to control.” He also revealed that controlling one’s powers will be somewhat of a theme throughout the movie saying QUOTE “that’s a motif throughout the piece, the element of learning to control one’s emotions and to use your powers wisely.”

The two are pictured in what appears to be training outfits, which we obviously know will be a huge part of her story since Captain Marvel takes places as galactic alien warfare is unfolding on Earth. Aaaaaand Enter Captain Marvel to kick some alien butt.

And let’s just say, it’s about damn time. Brie Larson is the first female to fully LEAD a Marvel movie, while director Anna Boden is the first female director to helm an MCU film. Speaking about the character to EW, Brie Larson revealed QUOTE “She can be aggressive, and she can have a temper, and she can be a little invasive and in your face. She’s also quick to jump to things, which makes her amazing in battle because she’s the first one out there and doesn’t always wait for orders. But the [not] waiting for orders is, to some, a character flaw.”

Should be interesting to see just how this feistiness meshes with the rest of the Avengers when she meets the gang next May in the sequel to this year’s Avengers: Infinity War.

Now it’s time for you to weigh in with your thoughts on Captain Marvel! Is she everything you hoped for? Let us know if the comments section below and then you can click right here for another brand new video and be sure to subscribe for even more from Clevver. Thanks so much for watching, I’m Sinead de Vries, and I’ll see you guys next time.
Posted by anim8trix at 12:00 AM