3Below is the BEST animated series of 2018 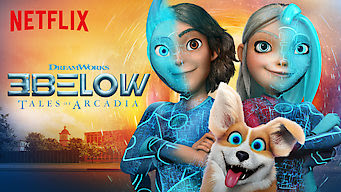 3Below: Tales of Arcadia
[Source: Syfy] Looking for a delightful streaming show to chase those post-holiday blues away? Netflix has you covered, and no, it isn't a sequel/mashup called Bird Box Bandersnatch 2: The College Years. Guillermo del Toro's next installment in the animated Tales of Arcadia saga is here— what he and his companions began in Trollhunters (one of the most underrated shows around), he continues in 3Below: Tales of Arcadia.


The show takes us across the stars to the planet Arkaridion-5, where Princess Aja (Tatiana Maslany) and Prince Krel (Diego Luna) are forced to flee after an intergalactic dictator stages a coup. They escape aboard a sentient mothership (voiced by Glenn Close) along with their guardian, Varvatos Vex (Nick Offerman) and their alien dog, Luug. They have to hide, so the mothership (or "Mother") chooses a planet that is so out of the way (and awful) that they will never be found. Lo and behold, Mother chooses a "mudball" called Earth, a place literally "named after dirt."

So to Earth they go, and in order to to blend in when going outside (and not appear like the shimmery, four-armed aliens they really are), Mother disguises them as three earth beings that no one will notice — Aja as a girl, Krel as a Latino boy, and Vex as a senior citizen.

Of course they land in the town of Arcadia, and as we know from Trollhunters, the place already sees its fair share of crazy stuff. The show has everything you'd expect from a del Toro project: humor, heart, great action, subversion, and a huge amount of fun. One moment, it's stating a double message about our heroes being illegal aliens, and the next moment Luug is farting laser beams. With a lesser team in place, such tonal shifts might give you some serious whiplash, but with del Toro, Rodrigo Blaas, Marc Guggenheim, and Chad Hammes at the helm, the ship always flies like a dream.

There's a lot (seriously, a lot) of new programming that is being offered right now, and 3Below: Tales of Arcadia deserves to be at the top of your queue... just in case the alien dog farting laser beams didn't get it there already.
Posted by anim8trix at 12:00 AM