Hayao Miyazaki’s First Major U.S.
Museum Show Will Be In Los Angeles
The Academy Museum of Motion Pictures, set to open in late 2019, will debut with a retrospective devoted to Hayao Miyazaki.

Presented in collaboration with Studio Ghibli, the Academy is calling the Miyazaki show “unprecedented” and “the first major exhibition of his work presented in the United States.” It is curated by Jessica Niebel.

The exhibition will take visitors on a thematic journey through his cinematic worlds using original production materials from Studio Ghibli’s archives, and features such films as My Neighbor Totoro (1988) and Spirited Away (2001). The exhibition will present more than 200 concept sketches, character designs, storyboards, layouts, cels, backgrounds, film clips, and immersive environments. A catalogue, film series, and public events will accompany the presentation, and unique Studio Ghibli merchandise will be sold at the museum’s shop.

Located at the corner of Wilshire Boulevard and Fairfax Avenue in Los Angeles, the Academy Museum will be located in the historic May Company Building, originally completed in 1939. Designed by Renzo Piano, the museum will have six floors including exhibition spaces, a 288-seat theater, an education studio, special event spaces, conservation areas, a café, and store. A new spherical addition will connect to the May Building via glass bridges and will feature a 1,000-seat theater and rooftop terrace. 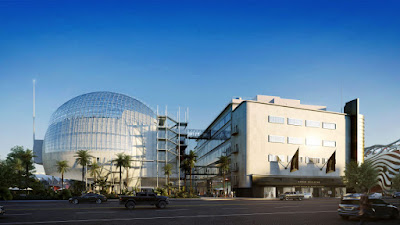 In addition to the temporary Miyazaki exhibition, the museum will launch with the permanent exhibit “Where Dreams Are Made: A Journey Inside the Movies” (working title), a 30,000-square-foot, two-floor survey of the art and science of motion pictures. Some concept paintings of the permanent exhibit are shown below:
Posted by anim8trix at 12:00 AM